"Martin Luther King: An Extraordinary Life. "
The Seattle Times
https://www.seattletimes.com/
seattle-news/special-reports/
martin-luther-king-an-extraordinary-life/
Martin Luther King Jr. lived an extraordinary life. At 33, he was pressing the case of civil rights with President John Kennedy. At 34, he galvanized the nation with his "I Have a Dream" speech. At 35, he won the Nobel Peace Prize. At 39, he was assassinated, but he left a legacy of hope and inspiration that continues today.
Seattle Times 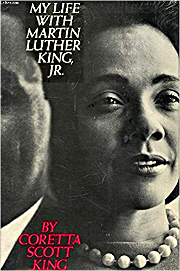 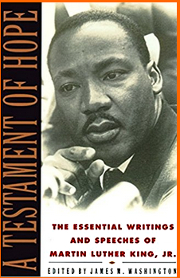 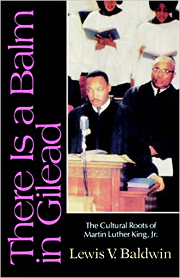 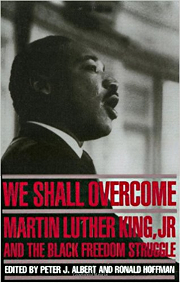 The Martin Luther King, Jr. Research and Education Institute.
Stanford University, 2017.
https://kinginstitute.stanford.edu/
Its principal mission is to publish the definitive fourteen-volume edition of The Papers of Martin Luther King, Jr.,a comprehensive collection of King's most significant correspondence, sermons, speeches, published writings, and unpublished manuscripts. The seven already published volumes have become essential reference works for researchers and have influenced scholarship about King and the movements he inspired. Building upon this research foundation, the Project also engages in other related educational activities. Using internet communications technology to reach a diverse global audience, it has greatly increased popular as well as scholarly awareness of King's achievements and visionary ideas.
https://kinginstitute.stanford.edu/

United States National Park Sevice
Martin Luther King Jr. National Historical Park.
United States National Park Service, 2018
https://www.nps.gov/
malu/index.htm
A young boy grows up in a time of segregation…A dreamer is moved by destiny into leadership of the modern civil rights movement…This was Martin Luther King, Jr. Come hear his story, visit the home of his birth, and where he played as a child. Walk in his footsteps, and hear his voice in the church where he moved hearts and minds. Marvel at how he was an instrument for social change.
https://www.nps.gov/malu/index.htm

White, Jack E.
"Martin Luther King"
Time.
2013
http://content.time.com/
time/magazine/
article/0,9171,988163-1,00.html
t is only because of King and the movement that he led that the U.S. can claim to be the leader of the "free world" without inviting smirks of disdain and disbelief.
Time 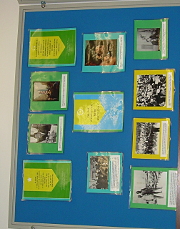 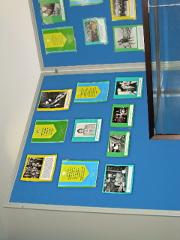 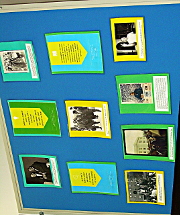 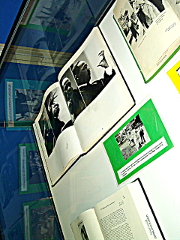 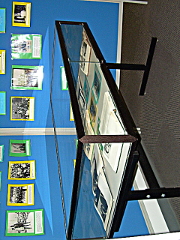 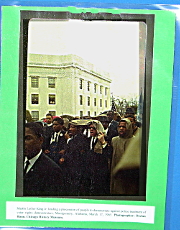 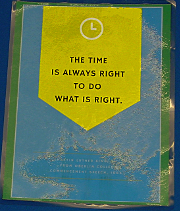 Albert, Peter J., Ronald Hoffman, and United States Capitol Historical Society. We Shall Overcome: Martin LUther King Jr., and the Black Freedom Struggle.
Pantheon Books, 1990.
E185.97.K5 W4 1990
Of the leaders of the civil rights movement, no other figure approached the significance of Dr. Martin Luther King, Jr. His speech at the 1963 March on Washington has come to symbolize the hardships and victories of an entire era. But in revering the memory of a great man, we sometimes lose sight of the many local and less glamorous struggles, both personal and social, and the world against which they were fought. In We Shall Overcome, America’s leading scholars and activists from the civil rights years speak on a fascinating range of experiences surrounding King and his era, from his early personal religious conversion to his impact on the anti-apartheid movement in South Africa; from his place in the history of the African-American church to the rise in Third World liberation struggles.
http://books.google.com

Anderson, Ho. Che. King: A Comics Biography.
Fantagraphics, 2010.
E185.97.K5 A75 2010
his groundbreaking body of comics journalism collects for first time Anderson's entire biography of the renowned civil rights leader Rev. Martin Luther King, Jr. Over a decade in the making, the saga has been praised for its vivid recreation of one of the most tumultuous periods in U.S. history and for its accuracy in depicting the personal and public lives of King, from his birth to his assassination.
http://books.google.com

Baldwin, Lewis V. The Legacy of Martin Luther King Jr.: The Boundaries of Law, Politics, and Religion.
University of Notre Dame, 2002.
E185.97.K5 L35 2002
his volume explores the development of Martin Luther King, Jr's understanding of the relationship between religion, morality, law and politics. This work is part of a broader effort by scholars in various fields to examine unexplored areas in the life, thought and activism of Martin Luther King, Jr. This study is also an in-depth analysis of King's views on the roles that religion and morality ought to play, not only in public debate concerning political choices and law, but also in efforts to create political and legal structures that are just and to perpetuate participatory democracy.
http://books.google.com

Baldwin, Lewis V. There is a Balm in Gilead: The Cultural Roots of Martin Luther King Jr.
Fortess Press, 1991.
E185.97.K5 B35 1991
Examines King's roots in Black popular culture and their role as the source of his power and vision.
http://books.google.com 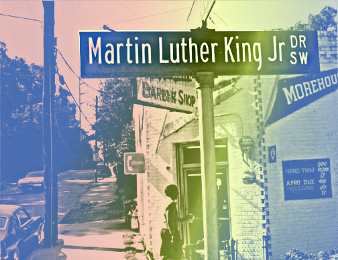 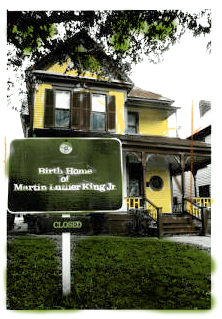 Burrow, Rufus. Extremist for Love: Martin Luther King Jr., Man of Ideas and Nonviolet Social Action.
Fortress Press, 2014.
E185.97.K5 B7995 2014
What Can be done to Keep Hope Alive? In spite of extensive research and publishing on King, insufficient attention has been given to the convergence of ideas and action in his life. In an era where people are often sorted into the categories of "thinker" and "doer," King stands out--a rare mix of the deeply profound thinker and intellect who put the fruit of that reflection into the service of direct social action.
http://gilfind.gsu.edu

Cone, Jennifer H. Martin & Malcolm & America: A Dream or a Nightmare.
Orbis Books, 1992.
E185.97.K5 C66 1992
This ground-breaking and highly acclaimed work examines the two most influential African-American leaders of this century. While Martin Luther King, Jr. saw America as " essentially a dream...as yet unfulfilled" , Malcolm X viewed America as a realized nightmare. James Cone cuts through superficial assessments of King and Malcolm as polar opposites to reveal two men whose visions were complementary and moving toward convergence.
http://gilfind.gsu.edu

Deats, Richard L. Martin Luther King Jr.: Spirit-Led Prophet: A Bigraphy.
New City Press, 2000.
E185.97.K5 D42 2000
Spirit-led Prophet chronicles Kings activities illustrating his nonviolent faith and how he lived it out in his ministry. In the midst of a tumultuous public life, King prayed for guidance and depended upon Gods spirit to lead him. Despite the cruelty and violence of the forces arrayed against the movement, King stressed the necessity to love ones enemies, to believe that unearned suffering is redemptive and to have faith in Gods just purposes.
http://books.google.com

Frady, Marshall. Martin Luther King Jr.
Penguin Group, 2002.
E185.97.K5 F695 2002
As a young journalist in the South in the 1960s, Marshall Frady walked the hot sidewalks, sat in crowded churches and courtrooms, and interviewed prominent civil rights leaders. Now the critically acclaimed biographer profiles a man whose spiritual and political leadership gained him an indelible place in twentieth-century history. In his masterly and riveting Martin Luther King, Jr., Frady draws on his twenty-five years of award-winning commentary on American race relations to give an inspiring portrait of this amazing leader and the turbulent era in which he lived.
http://gilfind.gsu.edu 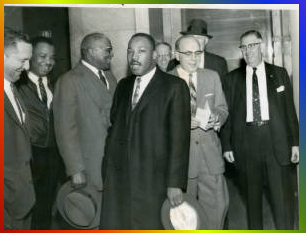 King, Coretta Scott. My Life with Martin Luther King Jr.
Holt, Rinehart, and Winston, 1969.
E185.97.K5 K5
A collection of sermons by this martyred Black American leader which explains his convictions in terms of the conditions and problems of contemporary society.
http://gilfind.gsu.edu

King, Martin Luther Jr. Strength to Love.
Fortres Press, 1981.
BX6452 .K5 1981
A collection of sermons by this martyred Black American leader which explains his convictions in terms of the conditions and problems of contemporary society.
http://gilfind.gsu.edu

King, Martin Luther Jr. Stride Toward Freedom: The Montgomery Story.
Harper & Row, 1986.
E185.89.T8 K5 1986
Chronicles the Montgomery, Alabama bus boycott sparked by Mrs. Rosa Park's refusal to give up her seat to a white male, describing the plans and problems of a nonviolent campaign, reprisals by the white community, and the eventual attainment of desegrated city bus service.
http://gilfind.gsu.edu

King, Martin Luther and Alex Ayres. The Wisdom of Martin Luther King Jr.
Meridian, 1993.
E185.97.K5 A25 1993
Dr. King's personality is better known than what he said or stood for, and his violent death has overshadowed his life and message of hope. Drawing from his books, speeches, sermons, and other sources, this eloquent collection presents King's philosophy in his own words. one of the nation's greatest leaders.
http://books.google.com

King, Martin Luther Jr. , Clayborne Carson, and Kris Shepard A Call to Conscience: The Landmark Speeches of Dr. Martin Luther King Jr.
Grand Central Publishing, 2002.
E185.97.K5 A5 2002
his companion volume to "A Knock At Midnight: Inspiration from the Great Sermons of Rev. Martin Luther King, Jr". includes the text of his most well-known oration, "I Have a Dream," his acceptance speech for the Nobel Peace Prize, and "Beyond Vietnam," a powerful plea to end the ongoing conflict. Includes contributions from Rosa Parks, Aretha Franklin, the Dalai Lama, and many others.
Source 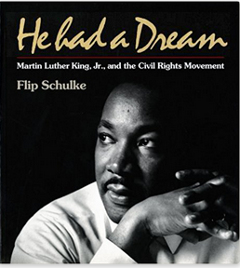 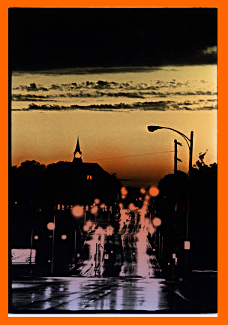 King, Martin Luther Jr. et. al. The Papers of Martin Luther King Jr.
University of California Press, 2014.
E185.97.K5 A2 1992
More than two decades after his death, Martin Luther King, Jr.'s ideas - his call for racial equality, his faith in the ultimate triumph of justice, and his insistence on the power of nonviolent struggle to bring about a major transformation of American society - are as vital and timely as ever. The wealth of his writings, both published and unpublished, that constitute his intellectual legacy are now preserved in this authoritative, chronologically arranged, multivolume edition.
http://gilfind.gsu.edu

Levvinson, Cynthia. We've got a Job: The 1963 Birmingham Children's March. P
Peachtree Publishers, 2012.
F334.B69 N4476 2012
By May 1963, African Americans in Birmingham, Alabama, had had enough of segregation and police brutality. But with their lives and jobs at stake, most adults were hesitant to protest the city's racist culture. Instead, children and teenagers -- like Audrey, Wash, James, and Arnetta -- marched to jail to secure their freedom.
http://gilfind.gsu.edu

Lewis, David L. King: A Biography.
University of Ilinois Press, 1978.
E185.97.K5 L45 1978
Acclaimed by leading historians and critics when it appeared shortly after the death of Dr. Martin Luther King Jr., this foundational biography wends through the corridors in which King held court, posing the right questions and providing a keen measure of the man whose career and mission enthrall scholars and general readers to this day.
http://books.google.com

Miller, Keith D. Martin Luther King's Biblical Epic: His Final, Great Speech.
University Press of Mississippi, 2012.
E185.97.K5 M4898 2012
In his final speech "I've Been to the Mountaintop," Martin Luther King Jr. delivered his support of African American garbage workers on strike in Memphis. Although some consider this oration King's finest, it is mainly known for its concluding two minutes, wherein King compares himself to Moses and seems to predict his own assassination. But King gave an hour-long speech, and the concluding segment can only be understood in relation to the whole. King scholars generally focus on his theology, not his relation to the Bible or the circumstance of a Baptist speaking in a Pentecostal setting. Even though King cited and explicated the Bible in hundreds of speeches and sermons, Martin Luther King's Biblical Epic is the first book to analyze his approach to the Bible and its importance to his rhetoric and persuasiveness.
http://books.google.com