82 Games.
http://www.82games.com
This site features articles and fine grained statistical information on both the court and front office side of professional basketball.
Source: Eileen H. Kramer

Adam, John
Stuff -- Baseball Business.
http://yknot.terapad.com/
Numerous links and articles about player salaries, trades, team worth, and other baseball business related topics. This site is part of a much larger site created by a professor of economics at Queens College in New York City.
Source: Eileen H. Kramer URL 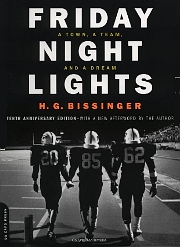 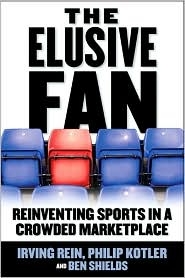 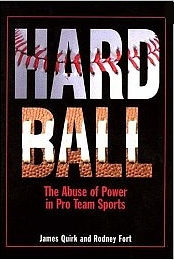 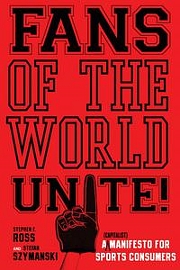 ProSports Daily.com
http://www.prosportsdaily.com/
The staff at ProSports Daily.com gathers links on games, gossip, team news, and more for baseball, football, hockey and basketball and offers it all in a blog-like format. The site also has forums for fans.
Source: Eileen H. Kramer

Sports News -- The Wall Street Journal.
http://online.wsj.com/public/
page/news-sports
-scores.html
Features articles about many aspects of sports from all over the world.
Source: Eileen H. Kramer 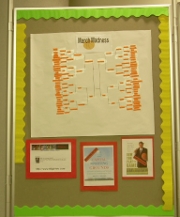 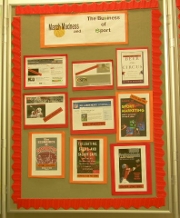 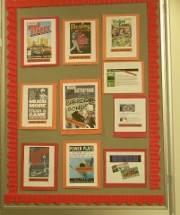 This display celebrates both the annual NCAA Division I basketball tournament and the economic and social side of sport. It features books, web sites, e-books, and of course the championship bracket, so you can follow your favorite team.

Abrams, Brett.
Capital Sporting Grounds: A History of Stadium and Ballpark Construction in Washington DC. Jefferson, NC: McFarland, 2009.
Call Number: GV416.N38 A37 2009 (Ebrary)
The stadium for the expansion Washington Nationals baseball team cost more than $600 million and while opponents decried the waste of taxpayer money, supporters said the stadium would generate economic development. The district’s past stadiums, tracks and Olympics facilities are described in this history, along with their political backdrops.
Source: http://gilfind.gsu.edu

Atkinson, Michael Editor.
Battleground Sports. Westport, CT: Greenwood Press, 2009.
Call Number: GV706.5 .B375 2009
Engaging and accessible to a wide variety of readers, this fascinating reference illustrates how sports controversies reflect the historically enduring and changing nature of our broader cultures, and the social battles we engage on a day-to-day basis surrounding the struggles for equality, debates about social violence, the ethics of competition, the politics of civic life, the creation of global communities, and the State's role in protecting citizens.
Source: http://www.greenwood.com

Berri, David J., Martin B. Schmidt, and Stacey L. Brook.
The Wages of Wins: Taking Measure of the Many Myths in Modern Sport. Stanford, CA: Stanford Business Books, 2006.
Call Number: GV716 .B47 2006 (Ebrary)
The book names names, and makes it abundantly clear that much of the decision making of coaches and general managers does not hold up to an analysis of the numbers. Whether you are a fantasy league fanatic or a casual weekend fan, much of what you believe about sports will change after reading this book.
Source: http://www.sup.org

Bissiger, H. G.
Friday Night Lights: A Town, a Team, and a Dream. Cambridge, MA: DaCapo Press, 2003.
Call Number: GV958.P47 B57 2003
Secular religions are fascinating in the devotion and zealousness they breed, and in Texas, high school football has its own rabid hold over the faithful. H.G. Bissinger, a Pulitzer Prize-winning journalist, enters into the spirit of one of its most fervent shrines: Odessa, a city in decline in the desert of West Texas, where the Permian High School Panthers have managed to compile the winningest record in state annals.
Source: http://www.amazon.com

Boyd, Todd and Kenneth L. Shropshire Eds
Basketball Jones: America Above the Rim. New York: New York University Press, 2000.
Call Number:GV889.26 .B28 2000
It began with Magic, Bird, and Dr. J. Then came Michael. The Dream Team. The WNBA. And, most recently, "Spree" Latrell Sprewell--American Dream or American Nightmare?--the embodiment of everything many believe is wrong--and others believe is exciting--about the game.
Source: http://www.amazon.com 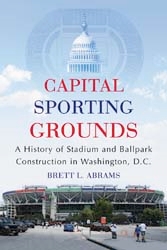 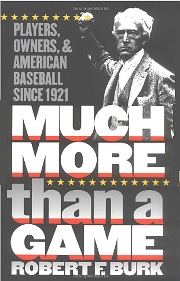 Burk, Robert Fredrick.
More than a Game: Players, Owners & American Baseball since 1921. Chapel Hill, NC: University of North Carolina Press, 2001.
Call Number: GV880 .B869 2001 (Ebrary)
As a microcosm of society, organized baseball has survived its share of battles over racism, pay inequity, unionizing and scandals. Here, Burk, chair of the history department at Muskingum College, follows up Never Just a Game: Players, Owners, and American Baseball to 1920 with an in-depth look at the sport as a business from its post-WWI golden age to beyond the 1994 players' strike.
Source: http://www.amazon.com

Colangelo Jerry and Len Sherman.
How You Play the Game: Lessons for Life from the Billion-Dollar Business of Sports. New York: Amacom, 1999.
Call Number: GV697.C63 A3 1999 (Netlibrary)
The owner of the Phoenix Suns (National Basketball Association) and the new Arizona Diamondbacks (major league baseball) gives us his autobiography from his humble beginnings in Chicago to his current status as the owner of these two successful franchises. Colangelo discusses his accomplishments and failures in the sports industry and offers insight into how professional sports work and what they must do to remain successful, especially through marketing, community service, and ethics.
Source: http://www.amazon.com

Curry, Timothy J., Kent Schwirian and Rachel A Woldoff.
High Stakes: Big Time Sports and Downtown Redevelopment. Columbus, OH: Ohio State University Press 2004.
Call Number: GV706.5 .C869 2004
The authors analyzed the building of Nationwide Arena, home to the NHL franchise Columbus Blue Jackets, and to a lesser extent, the building of a stadium for the Columbus Crew of Major League Soccer. They used media reports, official documents, and in-depth interviews with 34 of the people involved in the ballot issue to study the public process of how the stadiums were built.
Source: http://researchnews.osu.edu/
archive/highstak.htm

Kern, William S. Editor.
The Economics of Sports. Kalamazoo, MI: W.E. Upjohn Institute for Employment Research, 2000.
Call Number: GV583 .E36 2000 (Ebrary)
This collection shows how big-time sports has outgrown its role as a simple pastime. Fueled by fans' rising disposable incomes and the promise of jobs and local economic development, professional and major college sports have evolved into a multibillion-dollar economic sector that produces winners and losers both on and off the field.
Source: http://www.upjohninst.org/ 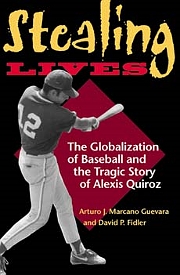 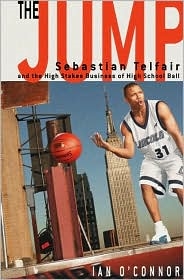 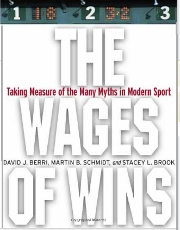 Marcano Guevera, Arturo J. and David P. Fidle.
Stealing Lives: The Globalization of Baseball and the Tragic Story of Alexis Quiroz. Bloomington, IN: Indiana University Press, 2002.
Call Number: GV880.22 .M37 2002 (Ebrary)
Stealing Lives takes a long, hard look at the exploitation and abuse of boys and young men by Major League Baseball teams searching Latin America for cheap baseball talent--placing that hunt in the context of the globalization of baseball. In telling the tragic story of young Alexis Quiroz, a Venezuelan teenager who dreamed of playing for the Chicago Cubs, the authors also reveal Major League Baseball's pattern of violation of human rights and labor standards in its practices in Latin America.
Source: http://www.amazon.com

Quirk, James P. and Rodney Fort.
Hardball: The Abuse of Power in Pro Team Sports. Princeton, NJ: Princeton University Press, 1999.
Call Number: GV716 .Q566 1999
Argues that professional sports use the monopoly power of the leagues to blackmail cities into financing stadiums and arenas, and suggests a solution to the problem.
Source: http://gilfind.gsu.edu

Ross, Stephen F. and Stefan Szymanski.
Fans of the World Unite! : A (Capitalist) Manifesto for Sports Consumers. Stanford, CA: Stanford Economics and Finance, 2008.
Call Number: GV583 .R675 2008 (Ebrary)
Fans of the World, Unite! is a clarion call to sports fans. Appealing to anyone who is in despair due to the greed and incompetence of team owners, this book proposes a significant restructuring of sports leagues.
Source: http://www.sup.org

Stein, Gil.
Power Plays: An Inside Look at the Big Business of the National Hockey League. Seacaucus, NJ: Carol Pub. Group, 1997.
Call Number: GV847.8.N3 S84 1997
This explosive book, by the most recent past president of the NHL, reveals what really goes on behind the scenes in professional hockey. Filled with entertaining anecdotes and personal vignettes written with total candor, Power Plays is as exciting as winning the Stanley Cup.
Source: http://www.amazon.com

Yost, Mark.
Tailgating, Sacks, and Salary Caps: How the NFL Became the Most Successful Sports League in History. Chicago, IL: Kaplan Publ, 2006
Call Number: GV955.5.N35 Y67 2006 (Ebrary)
The NFL is the most successful professional sport. The league's secret to success is sound business practices like revenue sharing and a salary cap.
Source: http://www.amazon.com

Zimbalist, Andrew S.
Unpaid Professionals: Commercialism and Conflict in Big-Time College Sports. Princeton, NJ: Princeton University Press, 1999.
Call Number: GV351 .Z56 1999
Big-time college sports embodies the ideals of amateurism and provides an important complement to university education. Or so its apologists would have us believe. As Andrew Zimbalist shows in this unprecedented analysis, college sports is really a massively commercialized industry based on activities that are often irrelevant and even harmful to education.
Source: http://press.princeton.edu/