Zora Neale Hurston on the Web

Atlas, Marilyn, Edgar Whan, and Annette Oxindine.
Zora Neale Hurston: Discussion Transcripts.
http://wiredforbooks.org/
zora.htm
On June 29, 1997 professors of literature at Ohio University, Marilyn Atlas and Edgar Whan, came to Studio B in the Ohio University Telecommunications Center to record a discussion about the novel Their Eyes Were Watching God by Zora Neale Hurston. They were joined by guest scholar Annette Oxindine of Wright State University. Here are the transcripts of the conversation.
Source: http://wiredforbooks.org/
zora.htm

Williams, Wyatt.
Atlanta participates in the Big Read with Their Eyes Were Watching God.
http://atlanta.
creativeloafing.com
What would happen if everyone in Atlanta read Their Eyes Were Watching God at the same time? The city has an opportunity to answer that question this month during the Big Read, a National Endowment for the Arts-sponsored civic-reading program.
Source: http://atlanta.
creativeloafing.com/
gyrobase/atlanta_participates
_in_the_big_read_with_theirM
_eyes_were_watching_god
/Content?oid=1361554

Association for Japanese Language Teaching
AJALT
http://www.ajalt.org/e/
Our association, by analyzing the individual needs of the students and developing teaching materials to meet those requirements, practices effective Japanese language education. We are also making every effort to promote global understanding as well as realizing domestic internationalization.
Source: http://www.ajalt.org/
e/profile/01.html 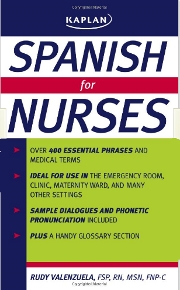 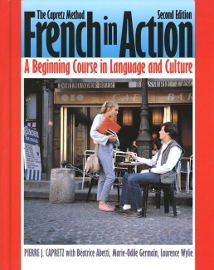 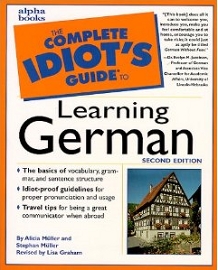 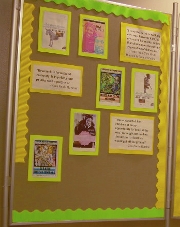 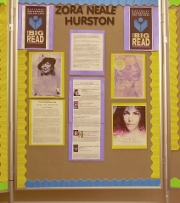 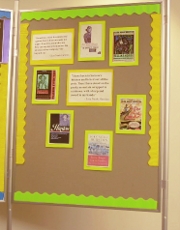 Celebrate March by joining Atlanta's civic reading project and enjoying Their Eyes Were Watching God by Zora Neale Hurston, and/or learn a foreign language! This display features material on both subjects.

Hurston, Zora Neale.
The Complete Stories. New York: Harper Perennial, 1996.
Call Number: PS3515.U789 A6 1996
With rich language and imagery, the stories in this collection not only map Hurston's development and concerns as a writer but also provide an invaluable reflection of the mind and imagination of the author of the acclaimed novel Their Eyes Were Watching God.
Source: http://www.harpercollins.com

Hurston, Zora Neale.
Dust Tracks on a Road. New York: Harper Perennial, 1996.
Call Number: PS3515.U789 Z465 1996
First published in 1942 at the crest of her popularity, this is Zora Neale Hurston's unrestrained account of her rise from childhood poverty in the rural South to prominence among the leading artists and intellectuals of the Harlem Renaissance.
Source: http://www.amazon.com

Hurston, Zora Neale.
Folklore, Memoirs, and Other Writings. New York: Library of America, 1995.
Call Number: GR55.H86 A3 1995
Library of America's companion to Hurston's Novels and Stories presents her nonfiction work, which is perhaps less familiar but no less important than her fiction in the body of black literature.
Source: http://www.amazon.com 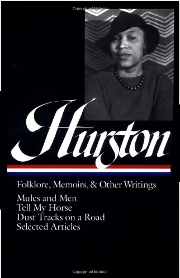 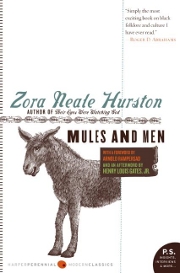 Hurston, Zora Neale
I Love Myself when I am Lauging -- And then Again when I am Looking Mean and Impressive: A Zora Neale Hurston Reader. Old Wesstbury, NY: The Feminist Press, 1979.
Call Number: PS3515.U789 A6 1979
The most prolific African-American woman author from 1920 to 1950, Hurston was praised for her writing and condemned for her independence, arrogance, and audaciousness. This unique anthology, with 14 superb examples of her fiction, journalism, folklore, and autobiography, rightfully establishes her as the intellectual and spiritual leader of the next generation of black writers.
Source: http://www.amazon.com

Hurston, Zora Neale.
Jonah's Gourd Vine: A Novel. New York: Perennial Library, 1990.
Call Number: Decatur PS3515.U789 J6 1990
Written in only three to four months in 1934, Jonah's Gourd Vine is the first novel published by acclaimed anthropologist, writer, and Harlem Renaissance personality Zora Neale Hurston. The book, based loosely on her parents' lives (but not really about them), explores the life and consciousness of John Pearson and his relationship with his wife Lucy Potts and other women in the town. Pearson was depicted as a minister in a small black Florida town, Eatonville, which in reality was Hurston's hometown.
Source: http://anacostia.si.edu/
online_academy/
academy/artifacts/objects/
object_8_frame.htm

Hurston, Zora Neale
Moses, Man of the Mountain. New York: Harper Perennial, 1991.
Call Number: PS3515.U789 M6 1991
A retelling of the story of Moses serves as an allegory for the struggle of American Blacks for release from slavery.
Source: http://gilfind.gsu.edu

Hurston, Zora Neale.
Seraph on the Suwanee: A Novel. New York: Harper Perennial, 1991.
Call Number: PS3515.U789 S47 1991
In a perceptive study of the meaning of love, two people find themselves at once deeply in love and deeply at odds.
Source: http://gilfind.gsu.edu

Hurston, Zora Neale
Tell my Horse: Voodoo and Life in Haiti and Jamaica. New York: Perennial Library, 1990.
Call Number: BL2490 .H88 1990
As a first-hand account of the weird mysteries and horrors of voodoo, Tell My Horse is an invaluable resource and fascinating guide. Based on Zora Neale Hurston's personal experiences in Haiti and Jamaica, where she participated as an initiate rather than just an observer of voodoo practices during her visits in the 1930s, this travelogue into a dark world paints a vividly authentic picture of ceremonies and customs and superstitions of great cultural interest.
Source: http://www.amazon.com

Hurston, Zora Neale
Their Eyes Were Watching God. New York: Perennial Classics, 1998.
Call Number: PS3515.U789 T639 1998
Of Hurston's fiction, Their Eyes Were Watching God is arguably the best-known and perhaps the most controversial. The novel follows the fortunes of Janie Crawford, a woman living in the black town of Eaton, Florida. Hurston sets up her characters and her locale in the first chapter, which, along with the last, acts as a framing device for the story of Janie's life.
Source: URL 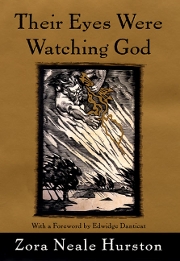 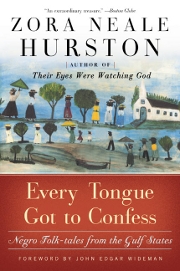 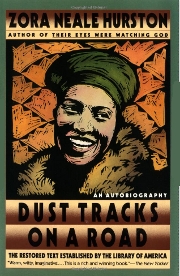 Association for Japanese-Language Teaching.
Japanese for Busy People I. New York: Kodansha International, 2006.
Call Number: PL539.5.E3 J359 2006
This concise course in natural Japanese is ideal for such students as businessmen whose aim is a working knowledge of the spoken language in everyday life. "Survival Japanese for Adults," as it might be called, gets to the heart of the language without recourse to childish or classroom-only Japanese.
Source: http://www.amazon.com

Danesi, Marcel.
Barron's Italian the Easy Way. Happauge, NY: Barron's, 2006.
Call Number: PC1121 .D35 2006
Readers who want to teach themselves Italian at their own pace and outside a formal classroom setting will find this book an excellent source for getting started.
Source: http://www.amazon.com

Filoco, Lourdes.
Ultimate Portguese: Beginner-Intermediate. New York: Loving Language, 2004.
Call Number: PC5067.5 .F55 2004
Ultimate Portuguese has everything you need to learn Portuguese from scratch or to revive the Portuguese that you learned years ago. This course combines conversation and culture in an easy-to-follow, enjoyable, and effective format. It's the perfect way to learn Portuguese for school, travel, work, or personal enrichment.
Source: http://www.amazon.com

Ganho, Ana Sofia
Using Portuguese: A Guide to Contemporary Usage. New York: Cambridge University Press, 2004.
Call Number: PC5260 .G36 2004
This guide to Portuguese usage covers the Brazilian and European varieties of Portuguese, and differentiates clearly between them. It pays special attention to those areas of vocabulary and grammar which cause most difficulty to English-speakers and also includes a special chapter for students familiar with Spanish, highlighting similarities and differences between the two languages. Consideration is given throughout to questions of style and register. The text is an essential reference for intermediate as well as more advanced students.
Source: http://www.amazon.com

Grayson, Gabriel.
Talking with your Hands, Listening with your Eyes: A Complete Photographic Guide to American Sign Language. Garden City Park, NY: Square One Publishers, 2003.
Call Number: HV2474 .G73 2003
An outstanding, user-friendly resource for those interested in learning ASL. Signs are grouped into chapters based on their meanings.
Source: http://www.amazon.com

Hong, Jungwook and Wang Lee.
Korean for Dummies. Hoboken, NJ: Wiley, 2008.
Call Number: PL913 .H58 2008
Start speaking Korean the fun and easy way with Korean For Dummies, a no-nonsense guide to Korean culture and the basics of Korean language. Pick up basic phrases and commonly used words so that you can converse with Koreans in both business and personal situations. You’ll learn Korean for everyday life and task-specific expressions for Korean on the go. In addition, you’ll discover important and fascinating aspects of Korean culture.
Source: http://www.dummies.com 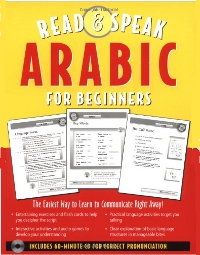 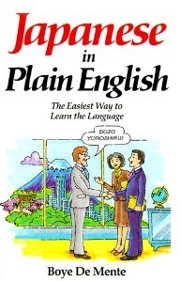