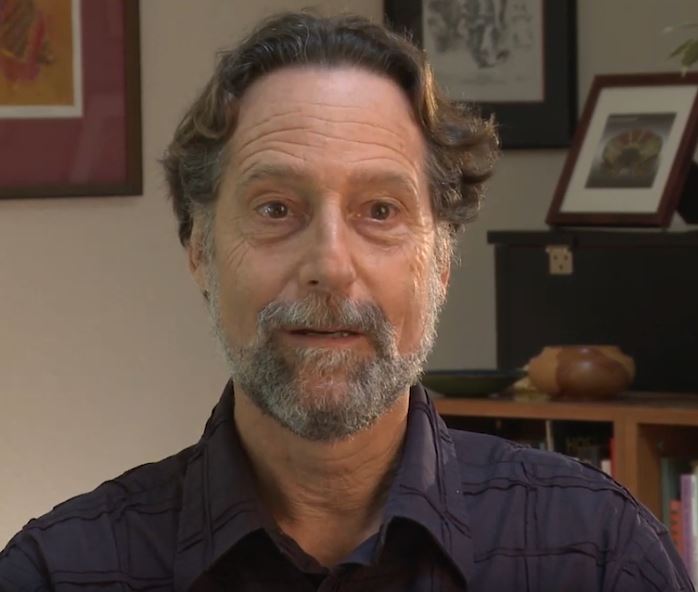 Biography:
Joel Singer, artist and filmmaker, was born in Montreal in 1948 and “reborn in San Francisco in 1974." Singer was thrice married to poet/filmmaker James Broughton (Montreal 1976 and 1977 and Sausalito, CA in 1978). Singer and Broughton collaborated on many films and book projects through the 1970s and 1980s. The couple left the Bay Area in 1989 to live for 10 years in Port Townsend, WA until just after James' death in 1999. Singer moved to New York City a few months before 9/11, living in the artist residence Westbeth with an old friend, artist/writer Tobias Schneebaum, until shortly before his death in 2005. Singer moved to Bali in 2009 with Nirgrantha, a New York born psychiatrist, and currently resides there. Singer has been making videos and his longtime work in photo collage has continued since moving to Bali. On his 70th birthday in 2018 he released a major work, LAST WORDS, a 30-minute film starring more than 200 individuals with music by Lou Harrison.

Abstract:
Topics discussed: (part one) Sat in on Broughton's film history class when visiting San Francisco Art Institute--love at first sight; Broughton was my advisor; sat with him at Pacific Film Archive, held hands; Had amazing times with Broughton, "god"; broke up with other boyfriend; Broughton navigated the world through touch; took a year or two for him to disentangle from family.; Age difference not noticeable until Broughton had prostate surgery at 75; Singer's role in Broughton's Godbody philosophy; Marist priest married them in Montreal, Christmas Eve 1977; two other ceremonies; Pressure from Jungian community for JB to marry Suzanna; Never felt that I was breaking anything up. Broughton would have liked to have it both ways, but it wouldn't have worked.; Ginsberg was great salesman for the Beats; Only point of friction was when JB edited Singer's footage of Sri Lanka in "The Gardener of Eden" film without him.; St. Louis Art Museum refused to show films: Banned in St. Louis; great audiences in Salt Lake City.; Film was about publishing poetry to a wider audience.; Harry Hay invited James and Joel to Second Radical Faerie Gathering in Colorado. Faeries were his ideal audience.; Broughton did his best writing away from home, alone. Kept a daily journal; Joel took James on many trips -- ultimately couldn't afford San Francisco.; Port Townsend was perfect place for Broughton's last 10 years.; Publisher Jonathan Williams was first person to call Broughton "Big Joy."; Reading journals was emotional, cathartic. PART TWO: Holding James was like holding my own soul.; James taught me to embrace wonder: "Adventure, not Predicament."; Joel's attraction to older men: Tobias Schneebaum, Nirgrantha, Kermit Sheets; Broughton's work with his "shadow" -- Elizabeth Osterman & Joseph Henderson were his depth therapists; Love & affection - harmony was constant for 25 years Ludar, Chilean-born singer/songwriter, set Broughton's poetry to music; Reads "The Bliss of With," "Wondrous the Merge"; Clarity of Joel's vision, single-mindedness gave James courage to leave wife and kids; Art Institute faculty and students didn't object to James and Joel's relationship; Broughton considered himself pansexual. Flirted with everyone. "Crazy old man."; Joel gets pleasure from Big Joy Project; not easy living in New York; Bali is easier.; Shows favorite photo of James which he took.; Reads from "Song of the Godbody"; discusses film of the same name.; The poem "This is It" was a mantra for James and Joel.; At Broughton's gravestone, reads "Nipples and Cocks."