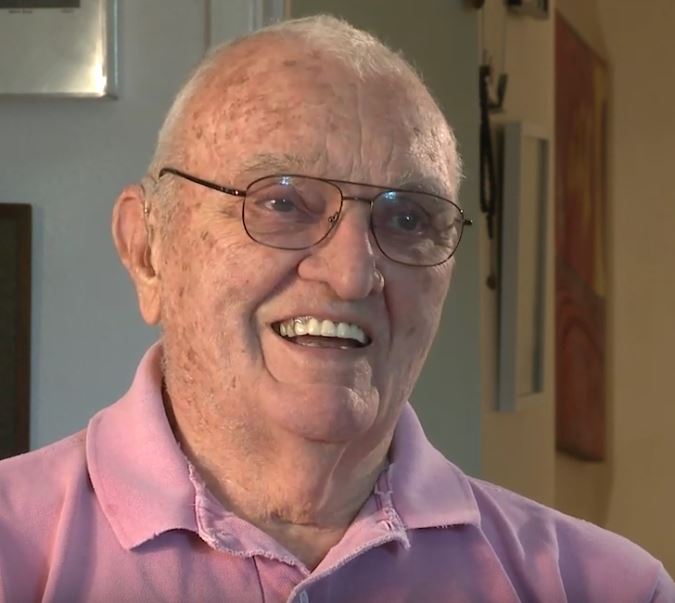 Biography:
Robert Louis Peters (October 20, 1924 - June 13, 2014) was an American poet, critic, scholar, playwright, editor, and actor born in an impoverished rural area of northern Wisconsin in 1924. He held a PhD in Victorian Literature. His poetry career began in 1967 when his young son Richard died unexpectedly of spinal meningitis. The book commemorating this loss, Songs for a Son, was selected by poet Denise Levertov to be published by W. W. Norton in 1967, and it still remains in print. Songs for a Son began a flood of poetry. Shortly after his divorce from his wife Jean, Peters met poet Paul Trachtenberg and established a relationship lasting more than 36 years. The two appear in the Broughton-Singer film "Devotions."

Abstract:
Topics discussed: Peters and Paul Trachtenberg watch their scene from Broughton's film "Devotions"; Good friendship with "evanescent," "erotic," "silly" Broughton; Free spirit freed me up in writing, in life, as I broke out of academia; I would follow my "wyrd" -- my fate; Poets can strike nerves that other kinds of writers can't; Most people don't care about poetry; Only remembers Broughton's "throw-away" poem, Nipples and Cocks; Beats were able to say what they pleased without concern with form, could beat back, kick, rage, howl; Joel Singer as affectionate, caring ; Reads "This is It," "This is It (2)," "God is my Beloved," "Canticle," "A Hymn to Big Joy," "Going with Big Joy," "Life with Big Joy."