On Display at Clarkston - Deep Archive: On Display -- April 2008

Big Bands: America's Romantic Era
"Welcome to this site which reprises and introduces the sound of the classic big bands. The site is intended for the enjoyment of that diminishing audience which remembers when the big bands were king. But more so it is intended to interpret the big bands to a younger audience unfamiliar with the full scope of the medium."
https://web.archive.org/web/
20060114135009/
http://cfelt.com/bigband.html
Source: https://web.archive.org/web/
20060114135009/
http://cfelt.com/bigband.html

Jazz – PBS Kids Go!
A multimedia site that explains jazz and jazz history to K-12 students and those who teach them. The site features a geographic and chronoligical timeline, video clips of interviews with musicians, lesson plans for teachers, and a band leader game.
http://pbskids.org/jazz
/index.html
Source: Eileen H. Kramer

JazzCorner
"JazzCorner.com is the largest portal for the official websites of hundreds of jazz musicians and organizations. New features on JazzCorner include the jazz video share where you can upload and share jazz and blues videos, JazzCorner Jukebox, surf the net with Jazz always on, submit your latest jazz news, and check out what's hot at JazzCorner's Speakeasy, the busiest bulletin board for jazz."
http://www.jazzcorner.com
Source: http://www.jazzcorner.com

A Passion for Jazz
"Jazz and Blues are among America's greatest cultural achievements and exports to the world commumity giving powerful voice to the American experience. Born of a multi-hued society it unites people across the divides of race, region, and national boundaries, and jazz music history has always made powerful statements about freedom, creativity, and American identity at home and abroad."
http://www.apassion4jazz.net/
Source: http://www.apassion4jazz.net/ 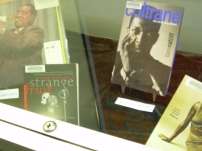 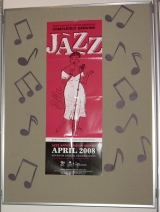 Acosta, Leonardo Cubano be, Cuban Bop: One Hundred Years of Jazz in Cuba. Washington DC, Smithsonian Books, 2003.
Call Nunmber: ML3509.C88 A2713 2003
Based on unprecedented research in Cuba, the direct testimony of scores of Cuban musicians, and the author's unique experience as a prominent jazz musician, Cubano Be, Cubano Bop is destined to take its place among the classics of jazz history. The work pays tribute not only to a distinguished lineage of Cuban jazz musicians and composers, but also to the rich musical exchanges between Cuban and American jazz throughout the twentieth century.
Source: http://www.amazon.com
/Cubano-Be-Bop-Hundred-
Years/dp/158834147X

Haskins, James and Kathleen Benson. Nat King Cole: A Personal and Professional Biography. Chelsea, MI: Scarborough House, 1990.
Call Number: ML420.C63 H3 1990
All the years have relegated to ancient history the extreme paradox of being a black star in a racist society, but Nat King Cole lived that paradox. His records sold millions of copies, and women swooned when he sang, but he couldn't be sure of getting a room in a good hotel. This book tells of his life.
Source: http://search.barnesandnoble.com
/Nat-King-Cole/James-S-Haskins
/e/9780812885224/?itm=1

Jenkins, Todd S. I Know What I Know: The Music of Charles Mingus. Westport, CT: Praeger, 2006.
Call Number: ML418.M45 J46 2006
Touching upon Mingus's many innovations as a jazzman, I Know What I Know explores his advancement of the art of bass playing; his assimilations of Ellington and Monk with ideas leaning toward free jazz; his experiments with ensemble dynamics, instrumentation, and extended form; and his working relationships with partners such as Jaki Byard, Eric Dolphy, Jimmy Knepper, and Dannie Richmond. The book provides a broad, informative overview of Mingus's work without veering into technical musical terminology. Readers without an extensive background in music will thus understand and appreciate the analyses provided, and be able to use them to enhance the experience of listening to the brilliant work of this legendary jazz great.
Source: http://search.barnesandnoble.com
/I-Know-What-I-Know/Todd-
S-Jenkins/e/
9780275981020/?itm=1

Lawrence, A. H. Ellington and his World: A Biography New York: Routledge, 2001.
Call Number: ML410.E44 L39 2003
Based on lengthy interviews with Ellington's bandmates, family, and friends, Duke Ellington and His World offers a fresh look at this legendary composer. The first biography of the composer written by a fellow musician and African-American, the book traces Ellington's life and career in terms of the social, cultural, political, and economic realities of his times
Source: http://search.barnesandnoble.com
/Duke-Ellington-and-His-World
/A-H-Lawrence/e
/9780415969253/?itm=1

Margolic, David. Strange Fruit: The Biography of a Song. New York: Ecco Press, 2001.
Call Number: ML3551 M29 2001
A portrait of "Strange Fruit," a song describing a racial lynching in the South which was recorded by Billie Holiday in 1939, examines the influence of the song on the growth of the civil rights movement.
Source: http://gilfind.gsu.edu

Ratliff, Ben. Coltrane: The Story of a Sound. New York: Farrar, Straus, and Giroux, 2007.
Call Number: ML419 C645 R37 2007
A study of jazz saxophonist John Coltrane and his musical development looks for the sources of power in Coltrane’s music and examines his important influence and legacy in shaping the course of modern jazz music.
Source: http://gilfind.gsu.edu

Reisner, Robert George. Bird: The Legend of Charlie Parker. New York: Da Capo Press, 1977.
Call Number: ML419.P4 R4 1977
For this first full-length reminiscence, Reisner interviewed eighty-one of Parker's friends, relatives, and fellow performers. From Charlie Mingus, one of the few real innovators since Bird, and Dizzy Gillespie, whom Parker once called 'the other half of my heart, ' to jazz historian Rudi Blesh and Parker's mother, each remembers Bird in his or her own special way.
Source: http://search.barnesandnoble.com
/Bird/Robert-George-Reisner
/e/9780306800696/?itm=1

Shipton, Alvin L. Groovin’ High: The Life of Dizzy Gillespie. New York: Oxford University Press, 1999.
Call Number: ML 419 .G54 S55 1999
Dizzy Gillespie was one of the most important and best-loved musicians in jazz history. With his horn-rimmed glasses, goatee, jive talk, and upraised trumpet bell, he was the hipster who most personified bebop. The musical heir to Louis Armstrong, he created the modern jazz trumpet-playing style and dazzled aficionados and popular audiences alike for over 50 years.
Source: http://search.barnesandnoble.com
/Groovin-High/Alyn-L-Shipton
/e/9780195144109/?itm=1

Simone, Nina. Put a Spell on You: The Autobiography of Nina Simone. Cambridge, MA: Da Capo Press, 2003.
Call Number: ML420 S5635 A3 2003
Simone grew up during the Depression in a small North Carolina town where, thanks to a farsighted music teacher and caring neighbors who paid for her lessons, she was trained as a classical pianist. After attending Juilliard on a scholarship she was rejected by the Curtis Institute in Philadelphia (a setback she attributes to the fact that she is black), and she became a nightclub entertainer, singing and accompanying herself on the piano and, with her skillful improvisations of popular songs in classical style, quickly becoming a star.
Source: http://www.amazon.com/Put-Spell-
You-Autobiography-Simone/
dp/0306805251

Townsend, Peter Pearl Harbor Jazz: Change in Popular Music in the Early 1940's. Jackson, MS: University of Mississippi, 2007.
Call Number: ML3918.J39 T7 2007
The book's central exposition—that before bop emerged in the mid 1940s jazz was a hard-wired staple of American mass culture, not a distinct and stand-alone artform, and was inextricably linked to other styles of music from which it took several of its supposed major inventions—Townsend demonstrates conclusively and with much illuminating detail. This is not, of course, a new insight, but Townsend's exhaustive research brings to it a heightened degree of verisimilitude.
Source: http://www.allaboutjazz.com
/php/article.php?id=25479

Gracyk, Theodore. "Jazz After Jazz: Ken Burns and the Construction of Jazz History." Philosophy and Literature 26(2002): 173-187. MLA International Bibliography. Web. 5 January 2016.
Jazz, a film by Ken Burns, is a fascinating and monumental achievement. In this essay, I identify and critique some of the project's core assumptions. My principal target is the assumption that a specific essence of jazz underlies most (but not all) of the music that is regularly identified as jazz and that the historical unfolding of this essence is the true subject of a historical investigation of jazz.
Source: Gracyk, Theodore -- the article.

Hagberg, Garry. "On Representing Jazz: An Art Form in Need of Understanding." Philosophy and Literature 26(2002): 188-198. Project Muse. Georgia Perimeter College Lib., Clarkston, GA. 10 April 2008 <http://muse.jhu.edu/>.
It is in any social context an achievement to gain an audience for an undervalued artform of between three and four million viewers for nineteen hours; to have done so against the backdrop of the fact—one bitter to swallow for so many American players of those years—that the country of origin for this artform was so slow to significantly value it, makes this documentary almost a form of cultural emergency-relief. But it also raises the stakes in how jazz is represented, which of its features are focused upon, and what kind of story is told about its development.
Source: Hagberg, Garry. -- the article.

Jackson, Jeffrey H. "Making Jazz French: The Reception of Jazz Music in Paris, 1927-1934." French Historical Studies 25(2002): 149-170. Project Muse. Georgia Perimeter College Lib., Clarkston, GA. 10 April 2008 <http://muse.jhu.edu/>.
That large audiences in Paris appreciate jazz music today is indisputable—a fact confirmed by a brief glance through any issue of Pariscope, where one can find jazz clubs and concerts to attend every night of the week. But perhaps the obviousness of the acceptance of jazz in Paris has obscured the need by historians of France to ask how it came to be and to explore what it can tell us about French culture.
Source: Jackson, Jeffrey -- the article.

McRae, Richard. "‘What is hip?’ and Other Inquiries in Jazz Slang Lexicography." Notes 57(2001): 574-584. Project Muse. Georgia Perimeter College Lib., Clarkston, GA. 10 April 2008 <http://muse.jhu.edu/>.
Among musicians themselves, the jam session exists as the central agency for communicating in a common musical language, in an atmosphere of collective spontaneity.
Source: McRae, Richard -- the article.

Saul, Scott. "Outrageous Freedom: Charles Mingus and the Invention of the Jazz Workshop." American Quarterly. 53(2001): 387-419. Project Muse. Georgia Perimeter College Lib., Clarkston, GA. 10 April 2008 <http://muse.jhu.edu/>.
The music was arguably born on 30 January 1956, a well-nigh apocalyptic moment when jazz composer Charles Mingus set in motion a novel but durable experiment in musical orchestration and simultaneously unveiled a menacing critique of modernist authority. Mingus had assembled his Jazz Workshop in the Atlantic studios to record "Pithecanthropus Erectus," a &qotjazz tone-poem" that was simple in the primordial sense.
Source: Saul, Scott -- the article.

Acoustic Alchemy. This Way. New York: Narada Jazz, 2007.
Call Number: MR3 .T349.8
It's an album that pulls a Burt Bacharach-style melody on one song and utilizes tricky modern time schemes on the next. Programming is plentiful but restrained, placing the emphasis where it should be: on the clever writing and enthusiastic playing.
Source: http://www.amazon.com/
This-Way-Acoustic-Alchemy/
dp/B000PHX55K
Format: CD. 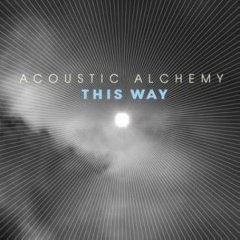 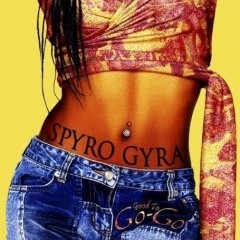 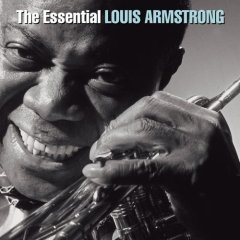