On Display at Clarkston - Deep Archive: 2008

The American Presidency: A Glorious Burden
The Smithsonian Institution
http://americanhistory.
si.edu
/presidency/home.html
To tell the story of the American presidency, the National Museum of American History, located on the National Mall in Washington, D.C., will feature a range of new media and interactive experiences. The key storytellers, however, are the more than 900 artifacts on view in "The American Presidency," most drawn from the museum’s holdings of more than 3 million objects, by far the largest collection of its kind in the nation.
Source: http://americanhistory.
si.edu
/presidency/home.html

American Presidents' Blog
Lorenzen, Michael and Jenny Weber
http://www.american-presidents.org/
This blog features links to and posts about assorted topics relating to the lives of past Presidents. Posts cover recipes, parties, life at the White House, and other fun facts pertinent to inauguruations past and present.
Source: Eileen H. Kramer

Documentary Photographs of Presidential Inaugurals
The Smithsonian Institution
https://web.archive.org/web/20090320071710
/ttp://photo2.si.edu/inaugural/
inau_top/inaugural.html This site features photos and sound files from Presidential inaugurations from 1881 to 1997. The navigation is straightforward though there is no video and not all the photos are of fantastic quality or particularly large and detailed. This is an archived page, and yes the images are broken.
Source: Eileen H. Kramer

"I Do Solemnly Swear..."
Library of Congress
http://memory.loc.gov
/ammem/pihtml/
"I Do Solemnly Swear . . .": Presidential Inaugurations is a collection of approximately 400 items or 2,000 digital files relating to inaugurations from George Washington's in 1789 to George W. Bush's inauguration of 2001. This presentation includes diaries and letters of presidents and of those who witnessed inaugurations, handwritten drafts of inaugural addresses, broadsides, inaugural tickets and programs, prints, photographs, and sheet music.
Source: http://memory.loc.gov
/ammem/pihtml/

List of Presidents of the United States
Wikipedia.org
http://en.wikipedia.org
/wiki/List_of_Presidents
_of_the_United
_States
An overview article and table with images that gives brief details on the lives of past United States Presidents. Note: Wikipedia has no paid fact checkers so please make sure a more standard source confirms the accuracy of any information. The site also has a link to a site on past presidents maintained by the United States White House.
Source: Eileen H. Kramer

Official Presidential Inaugural Medals
oin and Medal Collectors' Assylum
http://inauguralmedals.
com/Inaugurals
/Index.htm
Though not quite photographs, inaugural medals have a bit more gravitas than the average souvenir. Besides seeing Presidential likenesses struck in metal offers a somewhat different and rather interesting set of illustrations. This web site includes Presidents from most past inaugurations, including some obscure ones. Barack Obama's medal is not yet available.
Source: Eileen H. Kramer 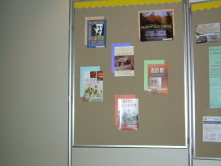 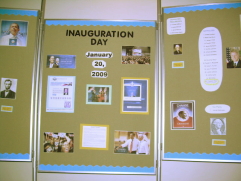 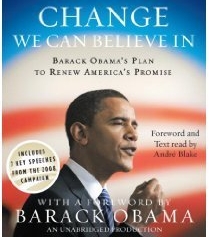 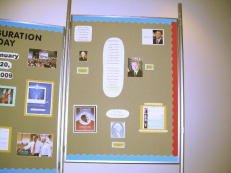 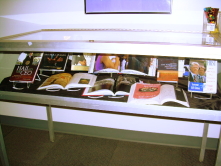 This display celebrates Barack Obama's Inauguration on January 20, 2009 as well as all things inaugural and Presidential writings in general. The written material and web sites cover everything from Presiential pets to, policy statements, to memorabilia.

Aikman, David. A Man of Faith: The Spiritual Journey of George W. Bush. Nashville, TN: W. Publishing Group, 2004.
Call Number: BR516 .A45 2004
More than any other world leader in recent times, George W. Bush is a man of faith? A conservative Christian who has brought the power of prayer and the search for God's will into the Oval Office. His faith has proven to be a bedrock of strength and resolve during two of the most tumultuous years in our nation's history.
Source: http://books.google.com

Bush, George W. A Charge to Keep. New York: Morrow, 1999.
Call Number: F391.4.B87 A3 1999
The [then] governor of Texas and presidential candidate offers a political memoir addressing many of the issues that may decide the presidential election in 2000.
Source: http://gilfind.gsu.edu

Carter, Jimmy. Always a Reckoning, and Other Poems. New York: Times Books, 1995.
Call Number: PS3553.A78144 .A79 1995
A handsome little thing it is, presenting 44 humble yet competent enough poems, each illustrated with a drawing by Carter's granddaughter. Disposed in four groups thematically entitled "People," "Places," "Politics," and "Private Lives," the 44 are about half lightly nostalgic, often keenly evocative, autobiographical narratives and half blunt and simple reflections of his famously charitable political and social convictions.
Source: http://www.amazon.com
/Always-Reckoning-Other-Poems
-Carter/dp/0812924347

Carter, Jimmy. Palestine: Peace not Apartheid. New York: Simon and Schuster, 2006.
Call Number: DS119.7 .C3583 2006
The former president draws on his understanding of Middle East history and his personal relationships with regional leaders to share an assessment of what he believes is necessary to bring lasting peace to Israel while preserving Palestinian dignity.
Source: http://gilfind.gsu.edu

Clinton, Bill and Al Gore. Putting People First: How We Can All Change America. New York: Times Books, 1992.
Call Number: E884 .C55 1992
Both voices on the Democratic ticket share their views on the state of American government and their proposals for implementing meaningful change.
Source: http://www.amazon.com/
Putting-People-First-Change
-America/dp/0812921933

Clinton, Hillary Rodham. Dear Socks, Dear Buddy. New York: Simon & Schuster, 1998.
Call Number: E886.2 .D48 1998
irst pets have always been popular, including such notables as FDR's Scottish terrier, Fala; Caroline Kennedy's pony, Macaroni; and Amy Carter's cat, Misty. President Clinton's cat, Socks, and his chocolate Labrador, Buddy, have also managed to attract quite a few fans since landing in the White House, the majority being curious children who have lots of interesting questions and aren't shy about sharing! In Dear Socks, Dear Buddy: Kids' Letters to the First Pets, First Lady Hillary Rodham Clinton gathers together more than 80 full-color photographs of the dynamic duo and 50 letters to them from kids across the United States and offers answers to their most-often-asked questions.
Source: http://www.amazon.com
/Dear-Socks-Buddy-Letters
-First/dp/0684857782

Clinton, Hillary Rodham. It Takes a Village: And Other Lessons Children Teach Us. New York: Simon & Schuster, 1996.
Call Number: HQ792.U5 C57 1996
The First Lady, a longtime child advocate, expresses her concerns for the children of today's world and offers her ideas for developing our society into one that values children's unique contributions.
Source: http://www.amazon.com
/Takes-Village-Hillary-Rodham
-Clinton/dp/0684825457

Gore, Albert. An Inconvenient Truth: The Crisis of Global Warming. New York: Viking, 2007.
Call Number: QC981.8 .G56 .G668 2007
In this adapted version of the recent documentary film’s companion, the former vice-president details the factors contributing to the growing climate crisis, describes changes to the environment caused by global warming, and discusses the shift in environmental policy that is needed to avert disaster.
Source: http://gilfind.gsu.edu 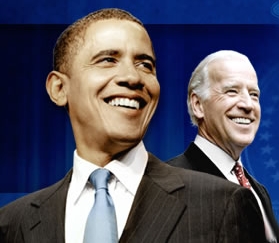 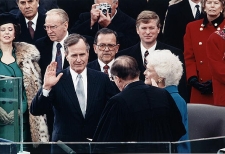 Halperin, Mark. The Undecided Voter's Guide to the Next President: Where the Candidates Come from, What They Believe, and How to Make Your Choice. New York: Harper Perennial, 2007.
Call Number: E901 .H35 2007
A guide to the 2008 presidential candidates provides an overview of each candidate, covering their basics, which includes career, religion, and education; their stand on the war in Iraq, health care, taxes, the economy, and other significant issues; and their strengths and weaknesses.
Source: http://gilfind.gsu.edu 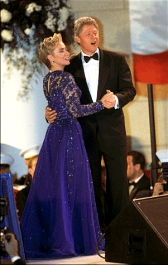 Hoopes, Jame. Hail to the CEO: The Failure of George W. Bush and the Cult of Moral Leadership. Westport, CT: Praeger, 2008.
Call Number: E903.3 .H66 2008
In this short of tightly argued work, Hoopes presents a clear thesis: George W. Bush has misunderstood and misused his moral authority as president....Hoopes argues that a misguided moral superiority animates decision making in the Bush White House, blinding them to the perils of abusing power...
Source: http://www.amazon.com
/Hail-CEO-Failure-George
-Leadership/dp/0313347840

Jones, Charles O. The American Presidency: A Very Short Introduction. New York: Oxford University Press, 2007.
Call Number: JK516 .J636 2007
As America stands poised at the start of another electoral rollercoaster, this "Very Short Introduction" is a timely guide to the process from a professor of political science. It is a brief history, a friendly explanation and a reassurance that enough checks and balances exist to ensure that whoever we get next year can't do too much harm. Which is good to know, given the current guy.
Source: http://www.independent.co.uk
/arts-entertainment/books
/reviews/paperback-the-
american-presidency-by-charles-
o-jones-767186.html

Kennedy, John F. Profiles in Courage. Harper Perennial. 2006.
Call Number: E176 .K4 2006
Awarded the Pulitzer Prize in 1956, Profiles in Courage resounds with timeless lessons on themost cherished of virtues and is a powerful reminder of the strength of the human spirit. It is, as Robert Kennedy states in the foreword, "not just stories of the past but a book of hope and confidence for the future." What happens to the country, to the world, depends on what we do with what others have left us.
Source: http://www.amazon.com
/Profiles-Courage-
Perennial-Classics-Fitzgerald
/dp/0060955449

McCain, John. Faith of my Fathers. New York: Random House, 1999.
Call Number: E840.8.M467 .A3 1999
As the 2000 presidential campaign heats up, Republican hopeful McCain, the senior senator from Arizona, weighs in with the most engrossing book to appear in a long time from a presidential candidate. Writing with Salter, his administrative assistant, McCain carefully avoids the pitfalls of self-promotion, knowing that he has a larger, more interesting story to tell than merely why he wants to be president.
Source: http://www.amazon.com
/Faith-My-Fathers-
John-McCain/
dp/0375501916

Obama, Barack. The Audacity of Hope: Thoughts on Reclaiming the American Dream. New York: Crown, 2006.
Call Number: E901.1 .O23 .A3 2006
The [then] junior senator from Illinois discusses how to transform U.S. politics, calling for a return to America’s original ideals and revealing how they can address such issues as globalization and the function of religion in public life.
Source: http://gilfind.gsu.edu 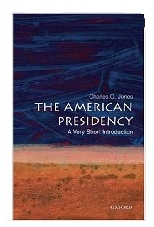 Obama, Barack. Change We Can Believe in: Barack Obama's Plan to Rnew America's Promise. New York: Three Rivers Press, 2008.
Call Number: E901.1 O23 .033 2008
At this defining moment in our history, Americans are hungry for change. After years of failed policies and failed politics from Washington, this is our chance to reclaim the American dream. Barack Obama has proven to be a new kind of leader–one who can bring people together, be honest about the challenges we face, and move this nation forward. Change We Can Believe In outlines his vision for America.
Source: http://www.amazon.com
/Change-We-Can-Believe-
Americas/dp/0307460452 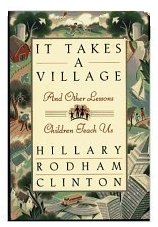 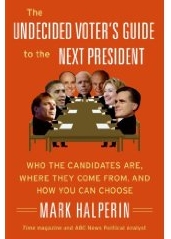