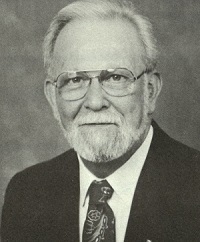 Ray has been a member of the American Flint Glass Workers Union since 1963 as a mold maker.  He served as President of Local 42, Local #6 and the Durham Central Labor Council.

From 1990-1999, Ray served as Secretary-Treasurer for the Georgia State AFL-CIO and in 1999 he was elected president.

Abstract:
Ray talks about his family background growing up in Durham, NC during the 1950s.  He openly discusses the segregation and prejudice he encountered and the integration of his high school.  Ray explains how he joined the labor movement during an apprenticeship in a machine shop at Owens-Illinois as a member of Local 6 of the American Flint Glass Workers Union.  He discusses his friendship with Wilbur Hobby, then President of the North Carolina AFL-CIO and his own position as head of the Durham Labor Council.   Ray states his views on Jesse Helms in the 1950s as follows: “He was a racist individual who never talked positively about anything he talked about.”  He mentions race relations in unions and the workplace, strikes, moving to Atlanta, his Atlanta Labor Council presidency, and his work with the Georgia State University Labor Studies Program and classmate/friend Charlie Key.  Ray also discusses relations between various unions, the Communications Workers strike of 1986, Atlanta mayors and labor, and Georgia politics, especially Congressman Buddy Darden, Zell Miller, and Bob Barr.

Gene Russo was born in Newark, New Jersey in 1935.  Both his mother, a seamstress, and his father, a butcher, were born to Italian immigrants.  The Russo family moved to Miami, Florida in 1948 where Gene finished school, and, at age 18, took a job at Southern Bell.  Although neither of his parents were union members, Russo joined the Communications Workers of America (CWA) even before starting his job—largely at the behest of his older sister Norma, a Southern Bell telephone operator.  He became a union steward in 1958, and within three months, became chair of the local Committee on Politics and Education (COPE).  Early in 1960, he was elected as vice-president of the local.  After six years as local vice-president, Russo ran for president of the local, winning with two-thirds of the vote.  In 1972, Russo transferred to Atlanta and became CWA Administrative Assistant in charge of Education in 1978.  In 1987, Russo ran for vice president of CWA District 3.  Winning that election, he went on to hold that post until his retirement in 1996.

Russo speaks at some length about his experiences as an Italian-American Catholic growing up in the World War II era in New Jersey.  He goes on to recall his life as a young man in Miami, including the strange circumstances under which his family moved to Miami, and the beginning of his career with Southern Bell.  He discusses in detail his work as a cable splicer’s helper and gives his perspective on the violent, 72-day CWA strike of 1955.  Russo then talks about his time as a member of the US Army Reserves and how that experience pushed him to be a more active union member.  He admits that he was an inactive member for his first five years with CWA, but says he quickly went headlong into union activity 1958, becoming a union steward in October of that year and COPE committee chair in early 1959.  He also talks of his rise to vice-president of the local in 1960, emphasizing his involvement in politics as well as his commitment to seeing that African-American CWA members were treated with respect and equality.  Russo then details his involvement with CWA throughout the 1960s, including his relationship with District 3 vice-president Ben Porch, his contract negotiations with Southern Bell, his rise to the presidency of the local in 1966, and his union leadership training at the University of Iowa in 1968.  In the final portion of part 1 of the interview, Russo discusses his decision to give up his job at Southern Bell in 1970 in order to run for president of the local for a second term.

Russo begins this part of the interview by talking about moving to Atlanta in 1972 to become a staff member for Ben Porch and director of greater Atlanta CWA Locals.  Other than working with the locals, his duties, he says, included maintaining his involvement with legislative affairs in Florida as well as initiating a legislative agenda in Georgia.  Discussing his new position in Atlanta, he outlines the political campaigns he took an interest in, particularly Sam Caldwell’s bid for Labor Commissioner of Georgia and Jimmy Carter’s campaign for President of the United States.  In discussing these campaigns, Russo highlights the importance of labor support for Democratic candidates.  He also recalls his promotion to CWA District 3 Administrative Assistant in charge of education in 1978.  He says that in that position he helped change the philosophy of union leadership education.  At the University of Georgia, which hosted CWA Region 3’s Leadership School, Russo saw that the members who attended the weeklong training sessions were exposed to a wide range of subjects, including philosophy and economics.  He continues by talking about his contract negotiations with Bell South and his run for CWA District 3 vice-president in 1986. After speaking in some detail about his run for District 3 vice-president, he discusses some of the methods he employed to create solidarity and dialogue amongst regional staff members and local leadership.  Russo says that as vice-president, improvements in healthcare and retirement were among his most important contributions to CWA.  He ends the interview by discussing labor politics in the early to mid 1990s, especially concerning Zell Miller’s campaign for governor of Georgia and Bill Clinton’s run for the White House.