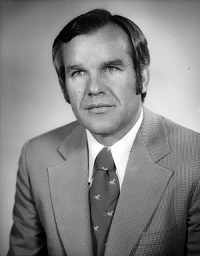 Biographical Information:
Herb Mabry was born in 1929 in Roswell, Georgia.  He studied labor law at the now defunct Woodrow Wilson College of Law in Atlanta.

Mabry began his union career in 1950 as a member of United Brotherhood of Carpenters and Joiners of America (Carpenters Union) Local 225 in Atlanta.  He worked his way up through the ranks to become President of that Local in 1969.  He was elected Secretary of the Georgia AFL-CIO at the 1970 convention in Augusta, Georgia.  In May 1972, the Executive Board elected Mabry to fill the unexpired term of J. O. Moore.  He was re-elected at each election until his retirement in 1999.

Abstract:
Mabry discusses life in Sandy Springs, Georgia during the 1930s and 1940s.  His first union membership began with the Carpenters’ Union and the Labors’ League for Political Education (LLPE).  He talks about local and national politics and influential men, including Ellis Arnall, Ralph McGill, Lester Maddox, Zell Miller, and former presidents Bill Clinton, Richard Nixon, Jimmy Carter, Harry Truman, and Gerald Ford.  Mabry also discusses membership in the AFL-CIO as a route to the Democratic National Committee.  He explains methods of office seeking in the unions at the local level.  Mabry has many personal affiliations which include: Muscular Dystrophy, National Leukemia, Georgia Trade Council, and King Center.  Concerning his role as a well-known labor leader when much popular opinion indicates distrust of unions Mabry says, “…there is not a state that I go in that I do not know people in that state and know them well.  I have never met a group of people that was any finer than they are in organized labor.”  He also talks about race relations, Al Kehrer, religion, and his children.

Biographical Information:
Harold McIver was born on April 1, 1931 at his family’s home between Sylvester and Moultrie, Georgia.  His father was very active in the Steelworkers Union.  He worked in the steel industry and became a member of the United Steelworkers Union.  In 1959 he was elected President of the Steelworkers’ Local.  Later McIver became organizing director for the Industrial Union Department (IUD) of the American Federation of Labor-Congress of Industrial Unions (AFL-CIO).  He was active in working for better labor relations and was present in the action depicted in the movie Norma Rae.  Mr. McIver passed away July 15, 1996.

Abstract:
McIver talks about his family background, including his family’s move to Atlanta and his father’s dedication to the labor movement.  Both McIver men worked at Atlantic Steel and were active in organizing.  He describes the worker grievances and strikes.  On the need to organize the J.P. Stevens textile mill, McIver says, “They didn’t have holidays or insurance or pension plan or things like that, and we [steelworkers] had them.”  He candidly discusses politics and legislation including Ronald Reagan, the National Labor Relations Board (NLRB), and Bill Clinton.  He also explains where the movie Norma Rae differs from what he remembers.  Importantly, he speaks about labor unions and their relationship with civil rights and religious organizations.

Ralph Meers
Interviewed by: Traci Drummond, October 5 & October 22, 2010
Transcript info: 133 pages (part one: 106 minutes, part two: 69 minutes)
Accession No: L2010-17
Biographical Information:
Ralph Meers was born in rural Draketown, Georgia, on November 28, 1939 to Forrest T. Meers and Myrtle Beatrice Thomason Meers.  In January of 1957, he dropped out of the twelfth grade to work at a wholesale grocer in Rockmart, Georgia, to support his family members, who had fallen into a difficult financial situation.  Shortly thereafter, with encouragement from a friend’s father, Meers applied for a job at the Atlanta Paper Company.  Near the end of the 1957, various individuals within the company began to push for organization.  After being offered several raises to thwart the attempts at organization, Meers joined in the organization efforts, eventually succeeding in 1959.  Meers married his wife, Sarah Francis, on August 8, 1958, fathering three daughters with her.  Recognizing the importance of education, he earned a GED in the same year.  Meers was extremely active in the union, eventually replacing Charlie Moss as shop steward in 1962.  Just two years later, Meers overtook Moss as President of the Local by just a single vote.  In 1966, Meers participated in his first union-sanctioned strike with the Atlanta Machine Workers.  Because of that struggle, Meers advanced a resolution at a national convention in 1968 to increase dues for the creation of a defense fund.  Though unsuccessful in his efforts, Meers triumphed in creating a defense fund on the Local level.  In his role as President of the Local, Meers was actively involved in the wildcat strike at the Mead Corporation in 1972.  Meers applied for a position with the Federal Mediation Affiliation Service, deciding against it after envisioning a greater purpose and role for the Local; from this vision, Meers established the Health and Welfare Trust Fund in 1973 and a supplemental pension 401(k) plan in 1983.  Meers was also intimately involved with the strikes in 1979 and 1981 against the Mead Corporation and in 1982 against the Quality Park Envelope Company.  In 1985, he was named Labor Leader of the year.  Between 1991 and 1992, Meers unsuccessfully ran against the International President of the Graphic Communications Conference, James Norton, between 91 and 92, creating a long-lasting internal conflict that was finally resolved with George Tedeski’s successful bid for the same position.

Abstract:
Meers begins the interview by reminiscing fondly of growing up in rural Georgia to a farmer and sawmiller father and a boarder and homemaker mother.  He describes in depth his first experiences and culture shock in moving to a boarding house in Atlanta and beginning work at the Atlanta Paper Company.  Though he was initially pleased with the APC, he noticed the anti-union sentiment pervading the management when organizers began circulating information and discussing unionization.  Much to his dismay, the company often portrayed organizers as “thugs and communists”; through this, he found the inspiration to become actively involved in the organization and election of the workers.  He describes the negative reaction of the company and struggle to continue organization, with the help of the AFL-CIO, finally succeeding in 1959.  He fondly speaks of his wife, daughters, and personal involvement as a parishioner of a local church and how this perspective helped him to maintain strength during hard times in working to advance the causes of the men and women he represented.  He proudly recalls his very active participation in all union activities and committees in the many different roles that he has played over the years.  He also elaborates on the experiences, training, and education which played an extremely important part in his growing leadership role.  Throughout the interview, Meers talks frankly about the racial inequities of the time and his own experiences in trying to advocate reforms and defend his friends and colleagues in many of the places he visited, stating simply, “I did it, because it was the right thing to do.”   He describes withstanding both internal pressures, from fellow members and other unions, and external pressures, from companies and unsympathetic organizations and parties, during his years pushing for a more workers’ rights, safer workplaces, and a stronger union, including the establishment of a Health and Welfare Trust Fund in 1973.  He explains his involvement in the Atlanta Machine Workers strike in 1966 (and the resulting creation of a Local defense fund and partnership with the Teamsters), the wildcat strike of 1972, the Mead strike of 1981, the Quality Park Envelope Company strike in 1982, among others, and the parts played by the October League, the Black Panthers, the KKK, Maynard Jackson, Hosea Williams, Martin Luther King, Sr., and many unnamed arbitrators, attorneys, and workers, as well as local and corporate management and representatives.  Additionally, he details the development of the union and establishment of local offices across the southeast.  In the second part of the interview, Meers examines his decision to run against James Norton as International President and the resulting internal strife and divisions.  He discusses how he successfully managed this conflict while maintaining the support of his membership in the Local, including mediation attempts and civil trials.  Meers also discusses his positive feelings on the recent merger with the International Brotherhood of Teamsters.  Meers wraps up the session with his thoughts on the progress of the labor movement as a whole and his proudest moments serving it.
Unions Represented: Graphics Communication Conference of the International Brotherhood of Teamsters, Local 527S; previously Graphic Communications International Union; previously Printing and Graphic Communications; previously Printing Specialties and Paper Products.

Biographical Information:
Joe Merritt was born December 23, 1918 in Brookwood, Georgia.  He and his brothers were raised in Savannah, Georgia, by their widowed mother.  He began delivering groceries at age eight.  He later became an ironworker and joined the International Association of Bridge, Structural, Ornamental and Reinforcing Iron Workers (Ironworkers).  He eventually became the President of the Ironworkers Local and was a member of the Tennessee Valley Authority District Council.

Abstract:
Merritt discusses his early life, job background, and the struggles and dangers involved for unions in Savannah.  He traveled all over the United States while working for unions.   Regarding leaders of the Ironworkers, Merritt considers P.J. (Paddy) Moran and Jack Lyons to be the most memorable men on the International staff.  He talks about people and situations in Georgia politics. When asked if Talmadge was a good governor, Merritt’s reply was, “I think he was.  He didn’t hurt the labor movement too much.”  He mentions the passage of the Taft-Hartley (1948) and Landrum-Griffith Acts (1959), also known as the Labor-Management Reporting and Disclosure Act, and union reactions to them.  In terms of the Ironworkers, he believes they focused on ability, not ethnicity, and that the Ironworkers’ emphasis on ability was supported by their apprenticeship programs.  Then Mr. Merritt explains the union hiring hall, for members needing work.  Finally, he discusses how he became a foreman.

Abstract:
Moss talks about his family background and growing up on a cotton farm in Ocee, Georgia. He then discusses his job at Atlanta Paper Company in the 1940s and his discharge, which was due to the company’s suspicion that he was organizing workers. He mentions the working conditions at Atlanta Paper and at Mead and women workers at Mead. Moss discusses his roles as an officer of the Pressmans’ Local. Barron Watkins was an associate in the union.  Moss then explains aspects of union organizing, and sit-downs and strikes at Mead, including Hosea Williams participation in 1972.  He then goes on to relate the dangers and threats faced by union officers because of union involvement and the negotiations in trying to organize the Montag factory. Moss explains the use of pro- and anti-union propaganda in various campaigns organizing Mead, Montag, and Georgia Blueprint.  He says that there was a sort of discrimination against women in the printing industry and unions.  There were ‘male jobs’ and ‘female jobs’ until “women’s liberation come along and we made the change and come around, male employers began to bid on those jobs that had been primarily females jobs only, the women began pouting that they shouldn’t have a right to come over.”  He mentions that before the change women’s jobs were less skilled and lower paying than men’s.  Moss also says that racism was evident at Mead print shops as was segregation at Atlanta Printing, but within the Pressmans’ union the membership was integrated.