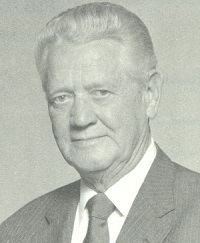 Biographical Information:
J. W. Giles, who was born January 20, 1925 in Atlanta, Georgia, attended John Brown Junior High and had a long career of union involvement. He was a member of the International Brotherhood of Electrical Workers (IBEW) from 1947 to 1965. During that time he held several positions in IBEW Local 84, including Vice President, President of Local 84 in 1959, and Business Manager from 1959-1965. In 1983 he became Business Manager and Financial Secretary of Local Lodge 84 as well as Vice President of the Southeastern Systems Council of IBEW.

Also active in other labor organizations, Giles served Secretary of the Georgia State AFL-CIO in 1968. He worked with the Occupational Safety and Health Administration (OSHA) as Labor Liaison for Region 4 in 1972, was elected President of Georgia Electrical Worker’s Association in 1984 and played a role in the Atlanta Labor Temple Association and the Atlanta Labor Council. He was also a member of the American Federation of State, County, and Municipal Employees (AFSCME) and served as Director of the organization’s District Council 14.

Abstract:
Giles begins by talking about growing up with a legally blind father and a mother with tuberculosis during the Great Depression, and his early work experience as a ‘soda jerk.’ He served in the Navy during World War II and was stationed for a time in China. Giles discusses his family life and post-war employment at Georgia Power Company during which he became a member of the International Brotherhood of Electrical Workers (IBEW). He says that while at Georgia Power, “What motivated [me] to get active in the union was the way we were being treated [by both union and employer].” Great-grandfather participated in the Civil War as a member of the Confederate Army. Giles talks about power struggles within IBEW’s staff and the Southeast Assistant Council; the William Stagier Act, which established OSHA (Occupational Safety and Health Administration); the 1968 wildcat strike; Hosea Williams; and AFSCME (American Federation of State, County, and Municipal Employees). Giles also mentions Dr. Martin Luther King, Jr. and civil rights, as well as problems of race relations within IBEW. On his views concerning segregation and civil rights, Giles says, “How can you tell a man to go fight for his country and then come home and tell his kids that you can’t use this water fountain and you can’t use this restroom, you can’t go in this restaurant, but yet son, when you get eighteen, you have to fight for your country too.” He also discusses the United Appeal.

Transcript info: Both interviews (January 16 and January 23) have been transcribed and integrated into one transcript.  88 pages (3 Tapes, 90 Minutes Each)

Herb Green was born in Norcross, Georgia on July 6, 1921.  Unable to regularly attend school due to the financial needs of his family during the Great Depression, Green worked several jobs during his teenage years.  In 1942 he was drafted into the Army where he spent three and a half years in the Army Air Corps.  Green was discharged from the service in 1946, and began working at the General Motors plant in Doraville, Georgia in 1949.  Immediately joining United Auto Workers (UAW) Local # 10, Green was soon elected to a leadership position.  In 1964, having served 10 years as the Chairman of the Shop Committee, Green left the Doraville plant upon being appointed as an International Representative by the UAW.  After more than 20 years as an International Representative for the UAW, Green retired in 1986 and since then has been an active member of the retirees’ chapter of the UAW.

Initially focusing on his early life, Green recalls working as a drug store “curb boy,” at a dairy, in a shoe factory and in a meat packing plant to help support his family after his father was relocated to a Ford assembly plant in Cincinnati upon the closure of the Ford plant in Atlanta in the early 1930s.  Green speaks about being drafted into the Army late in 1942, his experiences training in Atlantic City, and his service in Okinawa and in Japan.  Green goes on to discuss his discharge from the military in 1946, his working for Crane Heating Company, and his beginning with General Motors and union involvement in 1949.  After talking about his quick rise to the position of committeeman, Green stresses the importance unions hold in the workplace.  Rather than organizing and threatening to strike simply to demand higher wages, Green emphasizes that the union works to ensure such concessions as a safe and healthy work environment, cost of living adjustments and unemployment benefits.  Green further discusses his rise to Chairman of the Shop Committee in the Doraville plant and his appointment as International Representative by the UAW in the Education and Political Department in 1964.  Green recalls that as International Representative he was involved in political and legislative affairs.  He discusses in particular his involvement with the first Sam Caldwell campaign for Labor Commissioner of Georgia as well as his involvement with Jimmy Carter’s campaigns for governor and president.