James Parker
Interviewed by: Traci Drummond, November 29, 2010
Transcript info: 51 pages (77 minutes)
Accession No: L2010-21
Biographical Information:
James Parker was born in Piedmont, Alabama in 1937.  After graduating from high school in 1956, Parker spent a semester at Benedict College in Columbia, South Carolina, and eventually began working for the Union Camp Corporation in Stone Mountain, Georgia, immediately addressing inequalities in the workplace.  Inspired by childhood memories of his father’s union-related activities, Parker joined a local union in 1962 and leapt on an opportunity to become a full-time union organizer in September of 1969.  Parker traveled and helped organize various groups across the southeast from 1969 until 1984, when he was elected Vice President of the Atlanta Labor Council, where he worked in assisting other labor organizations with disputes, informing the public of various labor laws, and helping to elect sympathetic state representatives.  He was elected as Secretary Treasurer in 1998 and retired in 2008.  In 2000, he received the Labor Leader of the Year award from the AFL-CIO Labor Awards Committee.
Abstract:
In the interview, Parker elaborates briefly on his personal life, such as growing up with a large family on a farm in Alabama.  He speaks fondly of his father’s many occupations and union involvement, often including a young Parker in union activities, including participation in a union strike. He describes leaving Benedict College and moving around the southeast to different locations with different jobs, until deciding to head to New York with a friend.  During a brief stop in Atlanta, Parker and his friend were convinced to look for jobs in the area. After changing occupations a few more times, Parker started work with the Union Camp Corporation in Stone Mountain.  He describes with much detail the work he did to address inequality there and the resistance from management. With success and eventual promotion, Parker was recognized by the local union and offered a job as a full-time organizer.  He briefly mentions his wife, having initially met her at a Marvin Gaye concert, and their children, grandchildren, and soon-to-be great grandchild.  His daughter, Audrey, currently works at the very organization, Graphic Communications, from which Parker retired. Parker explains in depth about his participation in various organization campaigns, including Montag, his first campaign, Water Town in Madison, Georgia, Atlanta Blueprint, Industrial Southern Straw, and many other companies across the southeast. He speaks of working with Charlie Moss and Barron Watkins and, in particular, of traveling and working closely with Ralph Meers.  He describes the racism and anti-labor sentiment he experienced at many of these places, including being hit by a car and witnesses refusing to testify, being rammed by a car while driving, and having trash thrown at him while distributing information.  He describes his involvement in the investigation, arbitration and resolution of the wildcat strike at the Mead Corporation in Atlanta, initiated by Hosea Williams and the October League.  During his time with the union in various roles, Parker was involved in successful negotiations with over 25 companies and helped to establish a defense fund, a 401k plan, a credit union (serving as the Chairman of the Finance Committee), and a building fund for the union.  Parker concludes with fond words of his work in the Labor Movement, stating, “I really think that I was called to do this work, because it was so gratifying for me to really be a inspiration to the working man and working woman, to improve their lives and their families[…]”
Organizations Represented: Atlanta Labor Council; International Brotherhood of Teamsters, Graphic Communications Conference, Local 527-S

Robert "Benjamin" Porch was born on January 20, 1924, in Coosa County, Rockford, Alabama.  His family lived near a mill town in Alabama and Porch remembers witnessing company efforts to keep labor unions out of their factories and mills. His family later moved to Mount Pleasant, Florida, where Porch began working for 50 cents a day in the sawmill that his father owned. As a 15 year old, he took a summer job with the Rural Electric Association clearing the right of way for power lines. Because he had earned enough credits to graduate by the time he reached the 11th grade, he had the opportunity to enroll in courses for one year at Florida Southern.  After graduating from high school, and because he was too young to go to war, he worked as a lineman in north and south Florida, Alaska and Western Canada. He then returned to Birmingham and joined the Navy as an electrician for three years. After leaving the Navy, Porch worked for Southern Bell in Birmingham in 1946. He joined the newly formed union and began advocating for the Communication Workers of America (CWA) as a 24 year old. He soon after took an important leadership role and became active in union activities.  Becoming one of the youngest CWA leaders to be elected, he served as CWA Alabama Director from 1950-1954; CWA Director for Tennessee, Kentucky and North Carolina from 1955-1967; and in 1967 was elected CWA Vice President for District 3, representing nine Southeastern states, and serving as the Head of Bargaining for all companies.  He served as District 3 Vice President until he retired in 1987.  Porch continues to remain active as a CWA Retired Member, and as a member of the Board of Directors for the Joseph A. Beirne Memorial Foundation.

Ben Porch’s philosophy on life was shaped by his childhood experiences and as an electrical worker in the 1940s and 1950s. He discusses in some detail how the experience of growing up during the Depression era has shaped most of his life.  Porch talks about his early days working for Southern Bell (which later became Bell South) and how he came to be involved with the Communications Workers of America.  He underscores the significance of working under a construction supervisor who encouraged him to join the newly-formed union. Detailing the course of his leadership activities in CWA from the time he was elected Alabama Director through his tenure as Executive Vice President of CWA District 3, Porch emphasizes the importance of communication in labor-management relations.  He also discusses many southern campaigns. 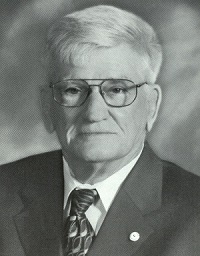 Biographical Information:
Billy Powell was born in 1934 in Atlanta, Georgia. He attended Roosevelt High School through grade 10, after which he joined the US Navy and fought in Korea. After joining the Communications Workers of America (CWA) he worked his way up the ranks from Steward to Plant Representative, to Vice President of CWA Local 3204, to President of CWA Local 3204. He was then elected Vice President of the Georgia American Federation of Labor–Congress Industrial Organizations (AFL-CIO) District 5 from 1978 to 1982.  Beyond his labor involvement, Powell served as President of the Atomic Veterans’ Association, which provides support and benefits for veterans exposed to nuclear radiation.

Abstract:
Mr. Powell begins his interview by explaining his family and personal background.  His parents both died when he was five years old, so he and his siblings were raised by various aunts and uncles.  He talks about Grant Park in the 1940s, including his employment as a soda jerk, and dropping out of high school to join the Navy.  Powell then talks about his experiences during the Korean War, mentioning especially his time at Pusan, visiting Japan, and hydrogen bomb testing in the Pacific.  He explains that after the war he went to work at Southern Bell, joined the Communications Workers of America (CWA), got married, and became an active organizer for the CWA.  When Mr. Powell was asked by his interviewer if Georgia Democrats have supported unions as they should, he replied that “they go hand in hand in the state.”  In terms of influential people, Powell lists Ms. Lillian Carter, Sam Caldwell, Zell Miller, and J.T. Becker.   He also discusses the changing labor workforce since the 1960s, civil rights, and the CWA’s Equity Committee.