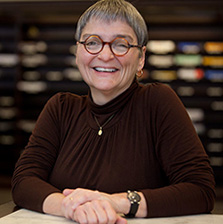 View transcript and listen to audio of interview

Biography:
Pici (frances anne Pici) was born and raised in Buffalo, NY. After high school Pici enrolled in college at the University of Buffalo in 1971.  During that time, U.B. was a very activist university and home to the newly created Buffalo Women’s Studies College (WSC) which was one of only two Women’s Studies Programs in the country, second only to San Diego State University. In 1974, Pici moved to Atlanta, GA, and immediately joined ALFA—the Atlanta Lesbian Feminist Alliance, which, at that time, was the first and only out of the closet lesbian-feminist organization in the country. She also joined the ALFA Omegas, the first out of the closet Lesbian Feminist softball team to play in the City of Atlanta leagues.

From 1974-1979 Pici was one of the founding mothers of Red Dyke Theatre (RDT), a lesbian feminist theatre troupe. After RDT disbanded, Pici became a City of Atlanta softball umpire, and also went on to Solo-Performance as a Feminist Mime and Comic. In 1982, Pici began her career at CNN in the CNN Library and in 1994 was part of the team who created and deployed CNN.COM. Pici received all of her college degrees from GSU, where she was awarded a B.A. in Communication/Theatre, an M.A. in Communication/Performance Studies, and an ABD Ph.D. in Moving Image Studies. In 2008, Pici started a new career at Emory University working in Woodruff Library’s Access Services, managing the Music and Media Library and is currently the Open Access Repository Analyst in the Library’s Scholarly Communication Office.

Abstract:
Pici describes her upbringing in Buffalo, N.Y. as the only daughter in an Italian Catholic family. She discusses the emergence of her lesbian feminist identity, which began during her undergraduate studies at the University of Buffalo. Pici talks about moving from Buffalo to Atlanta in the 1970s, when she joined ALFA (Atlanta Lesbian Feminist Alliance) and the ALFA Omegas, the first openly lesbian softball team in the city of Atlanta's softball league. Pici describes the experiences she had living in a lesbian collective house in Atlanta, including the interpersonal relationships and dynamics that were part of the group. Many of the women in the collective were artistic and creative, and they eventually formed the Red Dyke Theatre, an irreverent and unconventional lesbian theater troupe. Pici details her experiences with Red Dyke Theatre and with the Southeastern Arts Media and Education Project (SAME), a multi-disciplinary gay and lesbian arts education nonprofit. Pici talks briefly about working at CNN and at Emory University, and discusses her feelings about aging.

Biography:
AIDS activist and educator, Tonia Poteat has worked for the Global AIDS Program at the Centers for Disease Control and Prevention where she helped to monitor HIV treatment programs in sub-Saharan Africa and to develop guidelines that low income countries could use to initiate and improve their programs.

Abstract:
Tonia Poteat begins her interview talking about her first job as a lay health worker at the Feminist Women’s Health Center when she moved to Atlanta after college. While working there, she decided she wanted to get a clinical degree and work with women with HIV. She discusses starting ACT UP with Alicia Culver and later working for Project Open Hand. She talks about her draw to AIDS work and activism and the connections she sees between AIDS and other issues, and then describes her work at the Grady Infectious Disease Program in the Women’s/Family Clinic and at the CDC in the Global AIDS Program. She also describes issues she sees facing women with HIV and AIDS in Atlanta and in Africa. She discusses working to get a dedicated HIV Center in Atlanta. Poteat describes her views on feminism, stereotypes associated with HIV, and issues surrounding HIV and AIDS organizations.