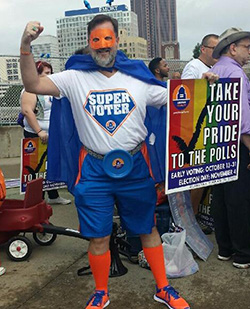 Excerpt: Jeff Graham talks about Georgia Equality and the realities of working at the state Capitol.

Biography:
After moving to Atlanta in 1989, Jeff Graham served as media coordinator for ACT UP/Atlanta. From 1994-2005, he served as the executive director of AIDS Survival Project, and he has been the Director of Georgia Equality since 2008. Graham’s advocacy work has been honored and recognized by a number of organizations, including the National Center for Human Rights Education, the Community Foundation for Greater Atlanta, Atlanta City Council and Southern Voice’s Best of Gay Atlanta. Graham was named the Grand Marshall of the 1999 Atlanta Pride celebration.