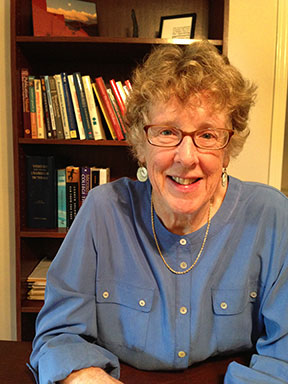 This interview is available in the Reading Room only.

Biography:
Susan Barrett was born in Western Massachusetts and grew up in New England and the Midwest. During her adolescence, she experienced prejudice as a member of one of the only three Catholic families in her small town in Ohio. Barrett describes herself as a rebellious teenager who skipped school, drank and smoked, and made friends with people her parents disapproved of. Barrett settled down after high school, attending college in La Crosse, Wis., and then at the University of Wisconsin in Madison. She became a physical therapist and worked at a VA hospital in Milwaukee, then briefly lived in California before enrolling in graduate school for physical therapy at Boston University. While in Boston, Barrett became interested in psychology, and she came out as a lesbian. Barrett eventually moved to Atlanta with her partner, where she began teaching at Emory University. She and her partner eventually, with several other women, co-founded Karuna Counseling in 1974. She remained at Karuna for six years. When Barrett was in her 40s, she and her then-partner adopted two Peruvian-born children, and they became the first family in Georgia to be granted a second-parent adoption. Barrett has continued to practice as a therapist since leaving Karuna.

Abstract:
In this interview, Susan Barrett gives an overview of her family, education, and work life. She discusses the process through which she decided to become a therapist, and her experiences co-founding Karuna Counseling. She also talks about coming out as a lesbian, adopting children with her partner, and her desire to be part of a strong lesbian community. Throughout the interview, Barrett discusses the conflict she has frequently experienced between being perceived as "mainstream" while belonging to a minority.

Transcript and video of interview

Biography:
Originally from New Hampshire, Jesse Harris Bathrick is a marriage and family therapist in Atlanta, Ga. She is also the founder of the Mulberry Fields Community Garden.

Abstract:
In this interview, Jesse Bathrick describes her early life in New Hampshire and the move to Atlanta, her family's relationships, and her education as a psychologist and an activist. She then recounts her time working at Karuna Counseling and its unique philosophy and process before concluding with a discussion of her current art practices and childhood memories of the Hebrew Benevolent Congregation Temple bombing in 1958.