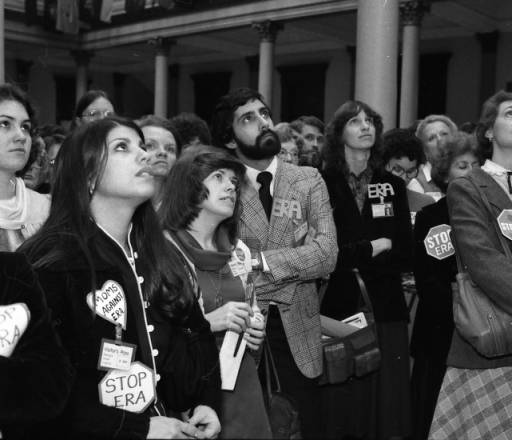 -Start with a journal:

- Have you ever heard of the Equal Rights Amendment?

- What do you think Equal Rights means?

-Introduction to the Equal Rights Amendment, go through history right up to before it failed. Don’t tell students that the ERA failed.

-Read the ERA and ask students for their opinions- is this an important law? Why or why not? Do they feel the effects of it.

- Listen to Sherry Sutton talking about the day of the vote.

- Ask students if they thought the law had passed, what are their reactions to this oral history?

- Start with a journal:

- Why are oral histories and other primary documents important to the telling of history?

- Why is it important to learn about a bill that didn’t pass?

- Listen to oral histories and identify key players in the movement (Phyllis Schlafly, Cathey Steinberg, Jimmy Carter, Ronald Reagan). You may also want to show images of the supporters and opposition, as the oral histories often involve how the two differed.

- Have students divide into three groups.

- Group three will present what they learned first, then group two, then group one. (Students will see how the information moves from broad and general, to very specific and emotional.)

- Start with a journal:

- Even though the ERA didn’t pass, do you think it has changed the course of history at all?

- Discuss other acts and bills and events which have been changing points for women’s history during this time period, such as Title IX, Billie Jean King’s tennis game, Equal Pay Act of 1963, Convention on the Elimination of All Forms of Discrimination against Women (United Nations) of 1979, and Roe V. Wade (1973).* This situate the ERA in a framework of the women’s movement rather than a singular act.

- Listen to Dorothy Tracy's Oral History  about the long term effects of the Women's Movement.

- Listen to Janette Pratt's Oral History about the accomplishments of the Women's Movement.

- In their groups, have them answer the following questions as thoroughly as possible using support from the primary, secondary, and tertiary sources they studied in their last group sessions.

- Give a timeline of battle over the Equal Rights Amendment

- Who supported the ERA and who didn’t?

- Why was there opposition? How did the opposition convince others to oppose the ERA?

- Why was there support? How did the supporters convince others to join the fight for the ERA?

-Start with a journal:

- Where are women now?

- Do you believe women have equality in the US?

-Take a poll of the class- how many believe women are equal in today’s society and how many do not.

- Invite students to share their journals, specifically why they think women are or are not equal.

-In small groups, have students create an ERA of their own, listing what they believe is needed in the law to ensure equality for women.

-Offer them the opportunity to share these ERA’s with community leaders or their representatives.

*Roe v. Wade is a decision which has created significant change in the course of women’s history, but can be considered very controversial. It may require approval from your administration, as well as students’ parents, depending on your community. It may also require more time than is allotted in this lesson plan. Use your best judgment on how to best approach Roe v. Wade with your students. More information and primary sources on the Roe v. Wade decision can be found here under the subheading "Reproductive Rights."