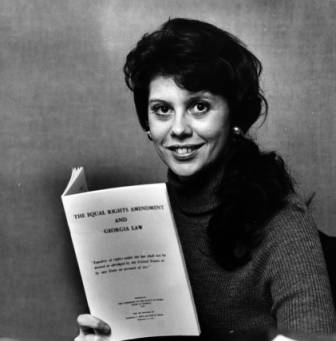 This unit will begin with students listening to oral histories recorded by Georgia State University Library’s Special Collections Women’s Collection archivists to document the debate surrounding the Equal Rights Amendment. The oral histories will be accompanied by written accounts of the debate, including secondary sources such as newspaper articles and textbook versions. Students will be asked to analyze the differences between these accounts as they become more secondary and tertiary. This will provoke students to understand the importance of oral histories as historical media, think critically about secondary sources of history, and think of historical events in context. Finally, students will be asked to participate in a mock debate, learning all of the nuances of their assigned side of the argument. Because no good debater goes into argument unprepared, they will also be expected to know their opponent. Students will be asked to reference the players they have come to know through the oral histories and root themselves within the time period of the debate. This will force them to recognize the historical frameworks which supported both sides of the debate.

To be sure, some opponents of such in depth study of one small and seemingly trivial event in American history may encourage teachers to focus on broad movements or major historical turning points. However, we believe focusing on an event such as the ERA debate provides opportunity for students to learn several important aspects of historical scholarship.

First, the ERA is documented in a way that many earlier national debates are not. This provides us with access to the emotional and personal side of supporters and opposition. Oral histories operate differently than written historical documents. Through the voice of the speaker, we can determine place through accent, emotion through intonation, intention through pauses. This unit encourages students to get to know the individual perception of a debate rather than one group versus another group. Students can see that even within each side of the debate there is disagreement.

This unit will also cause students to think critically about the widely accepted telling of history. They will be confronted with all sides of a debate rather than just the outcome. Students will begin to place historical events into the context of the time and place they occurred. For example, the debate over the Equal Rights Amendment differed in the South as opposed to other regions. Students will be asked to explain why this might be, but at the same time, they will be asked to determine the nuances of the debate on both sides. What was the general age of the opposition versus the supporters? What were some of the specific reasons for opposition and support that might be traced back to the movements immediately prior to this time period? How did the debate differ across racial lines?  An in depth examination of one well documented event can provide details that a general and sweeping survey of history cannot.

The mock debate will allow students to enter into the democratic process. As bell hooks (1994) says, “making the classroom a democratic setting where everyone feels a responsibility to contribute is a central goal of transformative pedagogy” (p. 39). Not only will they be reading and listening to people speak about a national debate which affected policy, they will be learning to recreate the democratic settings which allow for such debate to occur. Students will see themselves as agents of change, capable of discussing national policy through respectful rhetoric.

Additionally, students will learn how to cite primary sources and use oral histories to support persuasive arguments. Students will learn how primary sources may be more effective in detailing historical events than secondary sources, due to their personal nature. They will be able to enter into debate using meaningful personal narratives to substantiate their claims. This will prove invaluable as they go forth in future scholastic endeavors.

Finally, students will learn about an event that affected a marginalized group: women. As they start to question their learning of history, they will see that often men get to tell their stories, while women are left without a voice. As Peggy McIntosh (1988) says in her now canonized work "White Privelege and Male Privelege," I have often noticed men's unwillingness to grant that they are overprivileged in the curriculum, even though they may grant that women are disadvantaged" (p. 1). This inclusion of women's studies in history curriculum begins to address the privilege men have experienced throughout their education. Students can also begin to explore the intersectionality of race and gender as many of the oral histories deal with how African American women were included or not included in the debate. This subject matter gives a unique perspective that is not necessarily available in the sources from other historical events. Students can examine power dynamics which are present in nearly every other major event they will study.