A guide to the history of Georgia State University. 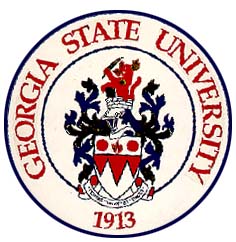 Georgia State University has evolved from an evening school of commerce to a dynamic urban university. The growth of Atlanta, the diversity of its population, and the prospect of Atlanta as a major communication and transportation hub, as an international city, and as a financial center--all have given the University a new kind of destiny in higher education. The University has experienced extraordinary growth in numbers of students, physical facilities, and quality of education as it seeks to meet the challenges of providing a broad range of educational opportunities in the largest and most diverse population center in the State.

The history of Georgia State University began in 1913 when it was founded as the Georgia Institute of Technology's "Evening School of Commerce." Holding classes in rented space in downtown Atlanta, the School moved its location several times to surroundings that could accommodate the increasing enrollment. Wayne S. Kell, distinguished member of the Georgia Tech staff, directed the School during this early period. Having been appointed by the institution's president and trustees "to take charge of the evening classes in the new science of business," Kell gave much of himself to the institution. Kell Hall is named in his honor.

The institution continued to grow under the direction of two additional directors affiliated with Georgia Tech. In 1918, John M. Watters, a dean of Georgia Tech, served as director of the school until 1925 when Fred B. Wenn, a professor in the school, succeeded him. In 1928, Dr. George M. Sparks became director of the institution at a time when Georgia and the nation moved into a severe depression. He later served as the first president. Sparks Hall, a major building on the campus housing administrative offices and classrooms today, recognizes his contribution to the institution.

The economic circumstances of the state and the nation in the 1930s brought about Georgia State's first period of independence. When the reorganization of state government created a Board of Regents to govern the University System of Georgia, the Regents decided that the Georgia Tech Evening School of Commerce should be an independent college in the new System. Independent throughout the Depression and World War II, the Tech School of Commerce in 1947 was incorporated by the Board of Regents into the program of the University of Georgia. At that time the institution became the "Atlanta Division of the University of Georgia."

This new name was needed to reflect the expansion of the academic program of the institution, which began shortly after 1957 when Noah Langdale, Jr., became second president upon the retirement of Dr. Sparks. Under President Langdale's leadership, the bachelor of arts and bachelor of science degrees were offered in addition to the undergraduate business degree, and the master of business administration degree began the advanced degree program. These additions were joined by other master's degrees and doctoral programs, the first doctorate being conferred upon a student in 1965.

In recognition of the academic advances made by the institution--and the services it offered both to students and to the community--the Board of Regents in 1969 changed the name once more--to Georgia State University.

The development of a broad concept of a modern urban institution, built upon a sound base of gifted faculty and basic programs, dedicated to bringing the rewards of learning to the community at large through formal and informal programs, and utilizing all communications media, gives Georgia State University a challenge and a spirit of pioneering as the administration, the faculty and the student body carve out its destiny. The early buildings, whose names recall the pioneering spirit of early leaders, are now joined by well-designed new structures that provide a modern setting for Georgia State University's fulfillment of its threefold mission of teaching, research, and public service.