Introduction to OERs and resources from OER presentations

This is the poster we presented at ACRL 2015 in Portland, Oregon and at the USG Teaching and Learning Conference in April, 2015. 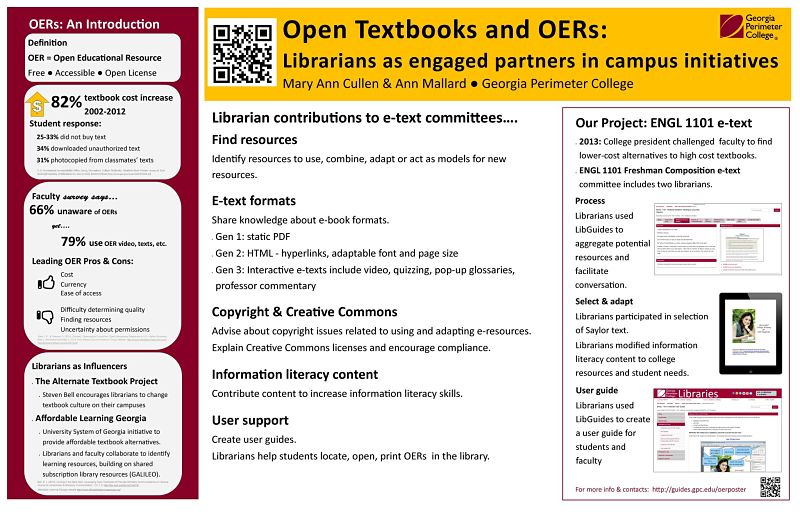 See the Resources page for our works cited and additional resources.

A narrative based on what most people wanted to know when they visited our poster.

At Georgia Perimeter College's convocation in Fall of 2013, our interim president, Rob Watts, told about an incident in his Freshman Composition classroom earlier that year:  Some of his students had not bought the assigned textbook because they could not afford it.  Their grades were suffering to the point of failing.  Until then, he was not aware of the cost of the textbook he had assigned and was surprised to find it was over $100.

He challenged the faculty of GPC to become aware of the cost of the texts they were assigning and to find low- and no-cost alternatives whenever possible.  Responses varied from finding an existing low-cost or free text to creating materials from scratch. Some projects were by committee while others were solo efforts.

Rosemary Cox, a veteran English instructor, formed a committee to explore options for ENGL 1101, our Freshman English course. The committee consisted of representatives from English as a Second Language, the Learning and Tutoring Center, and two librarians as well as English faculty.

Mary Ann Cullen and Ann Mallard, the librarians, volunteered primarily with the goals of infusing information literacy content into whatever work was selected and familiarizing themselves with the ENGL 1101 curriculum because library instruction is requested for ENGL 1101 more than any other course.

We ended up assisting in the project in more ways than we expected, including finding potential resources, explaining Creative Commons licensing and more.  See our poster for more details!

The committee chair was so pleased with the librarians' contributions to the project, that she has recommended librarian involvement on other OER projects. Since then, we have recommended resources for Intermediate Algebra and Political Science.