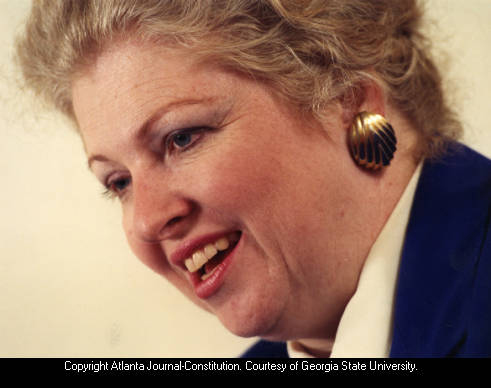 Pro-life protester taken away by police outside an abortion clinic, Atlanta, Georgia, July 19, 1988. 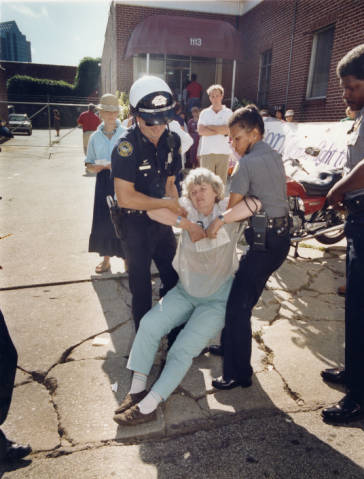 For expert legal research assistance, visit the GSU College of Law Library in the lowest level of the Urban Life building.

NARAL's Who Decides? is an annual publication of choice-related state laws and legislative activity.

Landmark U.S. Supreme Court Cases related to reproductive rights with a summary of what the court ruled, listed in reverse chronological order, and links to the full text cases.

Burwell v. Hobby Lobby Stores, Inc. (citation forthcoming), decided June 30, 2014 - Held that the U.S. Department of Health and Human Services could not demand that the three "closely held" corporations provide health-insurance coverage for methods of contraception (as delineated under the Patient Protection and Affordable Care Act of 2010), as to do so would "violate the sincerely held religious beliefs of the companies’ owners" as protected by the Religious Freedom Restoration Act of 1993.

McCullen v. Coakley (citation forthcoming), decided June 26, 2014 - Held that Massachusetts' Reproductive Health Care Facilities Act, which established that abortion opponents must maintain a 35 feet distance from the entrance of health facilities, viotated the 1st Amendment rights of the abortion opponents to exercise free speech and the right to peaceably assemble.

Gonzales v. Carhart (550 U.S. 124), decided April 18, 2007 - Ruled that Congress's ban on partial-birth abortion was not unconstitutionally vague and did not impose an undue burden on the right to an abortion.

Ayotte v. Planned Parenthood of Northern New England et al. (546 U.S. 320), decided January 18, 2006 - Held that a parental notification law related to a minor's abortion could not be completely stricken where only a few applications of the law presented a problem of constitutionality.

Ferguson v. City of Charleston (532 U.S. 67), decided March 21, 2001 - Held that the 4th Amendment does not permit the state to drug test pregnant women who seek prenatal care in a public hospital.

Planned Parenthood of Southeastern Pa. v. Casey (505 U.S. 833), decided June 29, 1992 - Reaffirmed Roe and also established a new standard that examined whether a state abortion regulation has the purpose or effect of imposing an "undue burden" on the woman.

Webster v. Reproductive Health Services (492 U.S. 490), decided July 3, 1989 - Upheld Missouri law that imposed restrictions on the use of state funds, facilities, and employees in performing, assisting with, or counseling on abortions.

Thornburgh v. American College of Obstetricians and Gynecologists (476 U.S. 747), decided June 11, 1986 - Held that "The States are not free, under the guise of protecting maternal health or potential life, to intimidate women into continuing pregnancies."

City of Akron v. Akron Center for Reproductive Health, Inc. (462 U.S. 416), decided June 15, 1983 - Court ruled that the city of Akron could not: require minors under 15 to obtain parental or judicial consent for an abortion; require physicians to give women information designed to dissuade them from having abortions; impose a 24-hour waiting period after the signing of the consent form; or require that all second-trimester abortions be performed in a hospital.

Harris v. McRae (448 U.S. 297), decided June 30, 1980 - Held that Title XIX does not require a participating state to fund medically necessary abortions for which federal reimbursement is unavailable under Hyde Amendment (an amendment to limit Medicaid funds for abortion costs).

Bellotti v. Baird (443 U.S. 622), decided July 2, 1979 - Held that a Massachusetts statute requiring women under 18 to obtain parental or judicial consent to have an abortion was unconstitutional.

Carey v. Population Services International (431 U.S. 678), decided June 9, 1977 - Hel that "the provision prohibiting distribution of nonmedical contraceptives to persons 16 or over except through licensed pharmacists clearly burdens the right of such individuals to use contraceptives if they so desire, and the provision serves no compelling state interests."

Roe v. Wade (410 U.S. 113) and Doe v. Bolton (410 U.S. 179), both decided January 22, 1973 - Ostensibly legalized abortion on the grounds of a woman's right to privacy, but protected states' interests in regulating abortions in protecting prenatal life and the women's health.

United States v. Vuitch (402 U.S. 62), decided April 21, 1971 - Held that a District of Columbia law permitting abortion only to preserve a woman's life or health was not unconstitutionally vague, concluding that "health" should be understood to include considerations of psychological as well as physical well-being.

Griswold v. Connecticut (381 U.S. 479), decided June 7, 1965 - Overturned the Connecticut law that prohibited contraceptive use by married couples, on the grounds that it violated the right to privacy under the due process clause of the 14th Amendment.

Skinner v. Oklahoma (316 U.S. 535),decided June 1, 1942 - Held that states could not impose sterilization as a penalty for a crime to prevent "unfit" individuals from reproducing.

Also check out the US Supreme Court Records and Briefs, 1832-1978 collection.

Some of the above rulings summaries were excerpted/adapted from the following websites:

holds that states may not impose sterilization as a penalty for a crime to weed out "unfit" individuals from the gene pool. - See more at: http://family.findlaw.com/reproductive-rights/reproductive-rights-u-s-supreme-court-cases.html#sthash.pazGd98X.dpuf