In the example below, our research question is:

What are the predictors of individuals wage in the dataset?

We are going to include the variables age, sex, education, and language in our model to test the direct association onto wages. Let’s break the variables down a bit more to better understand our linear regression model.

Below is a breakdown of the variables included in our model to help us keep track of the types of variables we are working with.

Wages of respondent (wages). This is a continuous variable that ranges from a score of 2.30 to 49.92, which is a large range! If you would like to investigate this variable more use the code for the descriptive statistics to better understand the distribution, which is very important for a linear regression model.

There are two formulas below a general linear regression formula and the specific formula for our example.

In this guide we will focus on formula 2 to further breakdown our linear regression test. Where, ${wages}_i$, is our dependent variable of the model that we are predicting with four independent variables of a specific observation $i$. This is equal to $\beta_0$, the intercept of the model where our regression line intersects with the y axis when $x$ is zero. We can think of $\beta_0$ as our starting wage value of the observations in the dataset. Next, $age(x_1)$, is the variable age multiplied by the calculated regression coefficient that is added to $\beta_0$. The same goes for $sex(x_2)$, $education(x_3)$, and $language(x_4)$ which are the remaining independent variables, sex, education, and language, that are multiplied by the calculated coefficients in the model. Lastly, $\epsilon$, is the error term of the regression formula, which is distance of each point ($i$) to the predicted regression line. We want to minimize this distance between our points and the regression line to have the best fit of our observed points.

Below is the Stata code for our linear regression.

We use the command regress to tell Stata we are building a linear regression model. We indicate our dependent variable as wages by ordering it first in the list of variables. All variables that follow after wages are our independent variables in the specified order of age, sex, education, and language. 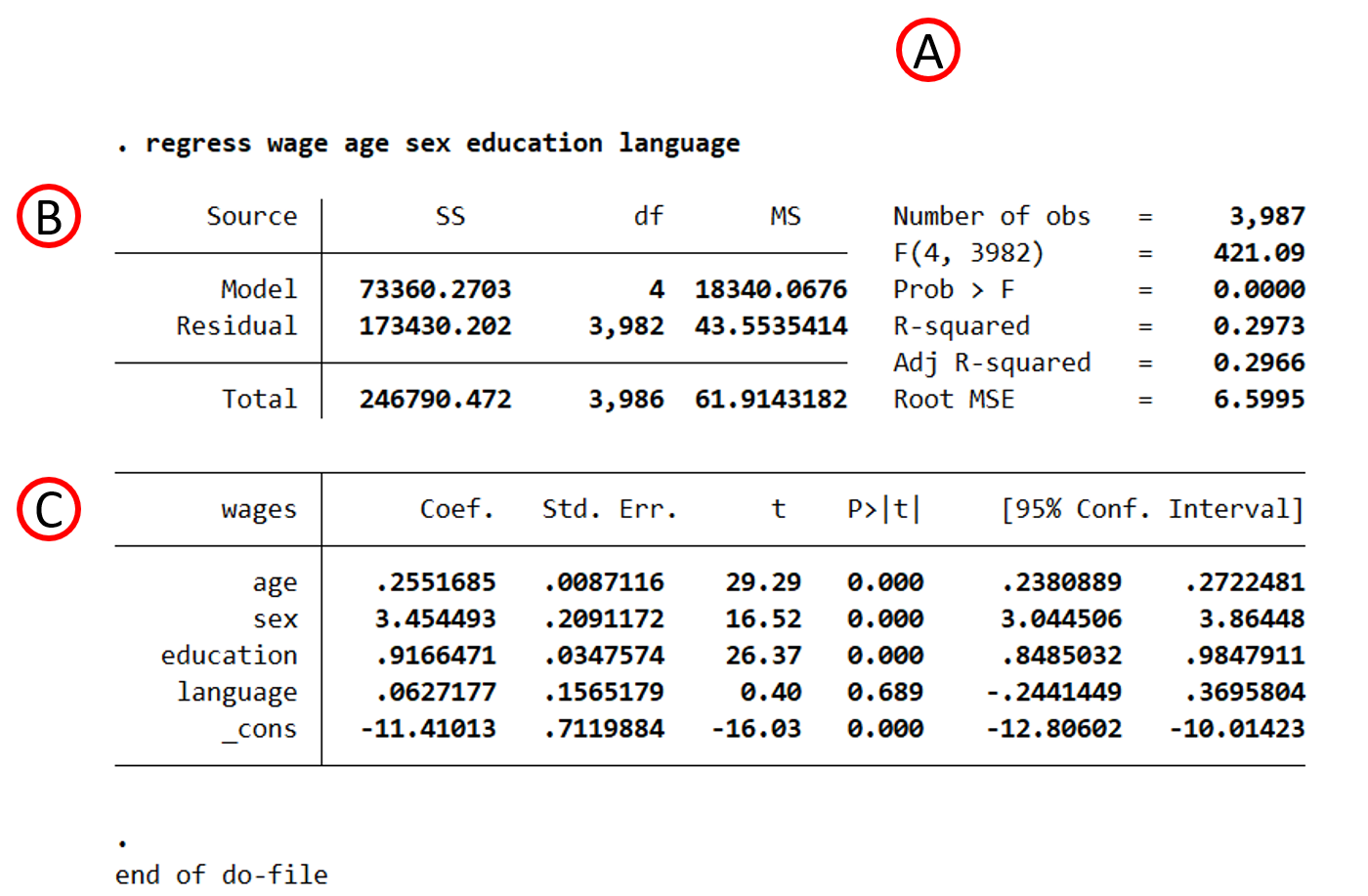 In the first output section to the right, Stata provides an overall summary of our regression model. We find the model fit statistics to judge how well our independent variables explain the variance of wages. Starting from the top row and moving down, we will go through each line of this section.

First, we have 3,987 observations included in this analysis of listwise deletion.

The second section of the output shows the calculated model fit measures such as SS (sum of squares) for the Model and the Residual (the amount of error in the model). These metrics are helpful in understanding the regression line in comparison to the data points. Reporting these are discipline specific and we will not go through these as they are not always used.

The bottom table shows us the results from our regression analysis for each independent variable included. There are five rows of results, age, sex, education, language, and _cons (constant, which is the intercept in the formula above). The _cons corresponds to our $\beta_0$ in the regression formula, which can be thought of as our ‘starting’ point on the graph.