Biography:
Virginia "Ginger" MacMahon Ackerman was born in Wilmington, North Carolina in 1939. She earned a bachelor's degree in business from Oglethorpe University in Atlanta, Georgia and was a stockbroker with Dean Witter Reynolds in Atlanta for seven years. She also worked as a director of marketing for Mainstream Access, Inc. in Atlanta for two years.  Ackerman first became involved in the ERA Georgia campaign by simply looking up the organization's number in the phonebook. She began her volunteerism by stuffing envelopes, filing and answering phones, but soon was asked to help organize the women in Cobb County. As a result of her efforts, the Cobb Coalition for the ERA was formed, affiliating with a number of different organizations including local churches, the YWCA, the League of Women Voters and the American Association of University Women (AAUW). An advocate and activist for ovarian cancer research, Ackerman passed away from the disease in 2010.

Abstract:
Ackerman discusses her childhood, family and early influential figures in her life. She recalls what it was like to be both a stockbroker and social activist in the late 1970s, and describes her role in the ERA campaign in Georgia. After her work with the ERA, Ackerman went on to participate in several gubernatorial campaigns and then furthered her professional career by taking a job at Dean Witter. Ackerman also discusses how her involvement in the women's movement affected her children and interfered with her professional life. In addition, she identifies what she considers to be the most difficult obstacles of the women's movement. 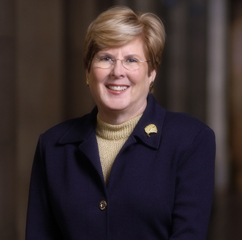 Excerpts:
Adams talks about becoming pastor for a large congregation

Adams talks about her calling, and about women in the ministry

Biography
Born in Atlanta, Georgia in 1944, Adams spent much of her childhood in Meridian, Mississippi. She entered Emory University in 1962 and graduated with a degree in English in 1966. During her senior year at Emory she married her classmate Alfred B. Adams III. Her husband attended Emory Law School and the couple had two children (1968 and 1970). After a few years of teaching at Grady High School in Atlanta, Adams entered Columbia Theological Seminary, graduating with honors in 1979. In the same year, she became Associate Pastor and Minister at Central Presbyterian Church in downtown Atlanta. She held this position until 1986, when she took over as pastor of North Decatur Presbyterian Church in Decatur, GA.  In 1991, Reverend Adams was appointed Senior Pastor of Trinity Presbyterian Church in northwest Atlanta, becoming the only women to hold this position in a parish of this size in the United States. She held the position for ten years. After serving as the Co-Pastor of the Fourth Presbyterian Church in Chicago, she returned to the Atlanta area in 2003.  Author of numerous articles and sermons, Adams has served in leadership positions on several church and community boards, including Columbia Theological Seminary and Agnes Scott College.

Abstract
The granddaughter and great granddaughter of ministers, Adams describes her love of God from a very early age, saying that one of her favorite childhood games was "preaching." She believed, however, "that one had to choose either motherhood and marriage, or service to God. You had to go one way or the other." Adams did go on to be both a wife and mother and also was a minister. She discusses the history of women in the Presbyterian Church, and how that has affected her expectations. She also talks about the Equal Rights Amendment and how natural it was for her, as a Christian, to support it.  Adams describes the pivotal role her church (Central Presbyterian) played in establishing homeless shelters in downtown Atlanta during the 1987 crisis in homelessness. She goes on to describe how, in 1991, she took over as Senior Pastor for Trinity Presbyterian Church, becoming the first woman in the United States to be in charge of a church of that size. Adams talks about her experiences there, and the importance of women leading in large parishes, stating that although women have come a long way in the Presbyterian Church, there is still in fact a "stained glass ceiling."   "And when I think how much simpler my life would have been if I had just belonged to the book club, but I did know that I had a purpose."

Excerpts:
Ashkinaze talks about the battle for the ERA in Georgia

Ashkinaze talks about the importance of the Women's Movement

Biography
Carole Ashkinaze was born in Manhattan, New York, on January 20th 1945. Ashkinaze spent her childhood in the suburban town of Malverne, Long Island in Nassau County, approximately twenty miles outside of New York [City]. She attended St. Lawrence University in New York and eventually went on to pursue a master's degree in journalism from Columbia School of Journalism in 1967. After graduating, Ashkinaze worked for a number of newspapers including Newsday in Long Island. But it was her role as reporter and then columnist and editorial board member for the Atlanta Journal Constitution that won her national recognition. Ashkinaze worked for the AJC from 1976 through 1989, eventually moving to the Chicago Sun-Times, working as both a columnist and as a member of the editorial board. In Atlanta, Ashkinaze wrote about a number of controversial issues including the Equal Rights Amendment, abortion, women's rights, feminism, poverty, health-care, politics, education and race. In Chicago, where Ashkinaze was the only pro-choice commentator for any major Chicago news organization, and a member of the Chicago Sun-Times editorial board, her columns won many journalism awards and a large popular following; she was also a popular radio and TV personality, and regular panelist on, ""The Lassiter Group."" Her pro-choice columns in the Sun-Times also made her a target of abortion foes, one of whom sent her several nude pictures of himself, bearing obscene messages. In 1992, following the publication of her 1991 book, The Closing Door: Conservative Policy and Black Opportunity (with Gary Orfield), Ashkinaze left the Sun-Times and returned to Atlanta to work with former President Jimmy Carter on his first domestic policy initiative, The Atlanta Project (later called The America Project), which was an attempt to alleviate the worst aspects of poverty across an entire community. She contributed her services to that project, working pro bono until the following year, when she was named Media Chief of the United Nations Children's Fund and moved to New York. She later left UNICEF and moved to Washington, D.C. where she worked as a freelance journalist for a number of national publications including Business Week, Horizon, and Moment magazines. After the Sept. 11, 2001 attacks in New York and Washington, she became a consultant to the American Civil Liberties Union. Reports she wrote and edited for the ACLU included Civil Liberties After 9/11 (2002), Freedom Under Fire (2003). She also worked with the Communications Consortium Media Center, the Harvard Civil Rights Project, the Fulbright Program and other nonprofits.

Abstract
Ashkinaze discusses her childhood in Long Island, her college experience at St. Lawrence University, and her graduate career at Columbia Gradate School of Journalism. She recalls her early experiences as a reporter at Newsday in Long Island and what it was like working for what she calls a ""hometown"" newspaper. Ashkinaze describes her move to Atlanta, where she was given the opportunity to work for other papers, including a thirteen-year stint at the Atlanta-Journal Constitution. She reflects on her early involvement with the AJC and how she began as a reporter, then worked on features, and finally became a columnist as well as a member of the newspaper's editorial board. As a features reporter, Ashkinaze covered Georgia politics, including the ERA campaign, and she describes in detail the ERA movement in Georgia. In 1989, Ashkinaze left Atlanta for Chicago where she continued covering politics, women's issues, and race.  She regularly wrote about abortion, and as a result, received an abundance of hate mail. Ashkinaze discusses some of the conflicts present within the women's movement, particularly the perception that the women's movement was primarily a ""white woman's cause,"" and how potentially damaging that misconception was to the movement.