Southern Labor Archives: Curriculum for the PATCO Records: Introduction to the PATCO Curriculum

The 1981 strike of the Professional Air Traffic Controllers Organization (PATCO) is an access point for teaching labor relations in the United States. The PATCO strike and its repercussions are considered a turning point in labor history where unions became more and more reluctant to use a strike as a negotiation tool, and employers began hiring permanent replacement workers for strikers as normal procedure.2 The disbandment of the PATCO union by Ronald Reagan and his administration continues to influence the labor sphere to this day. For example, it was often cited during the 2011 collective bargaining dispute in Wisconsin between public employees and Governor Scott Walker.3 You will be asked to think critically about the PATCO strike, taking into context the political and economic climate of the time in conjunction with the working conditions of air traffic controllers, and apply that knowledge to contemporary labor events. 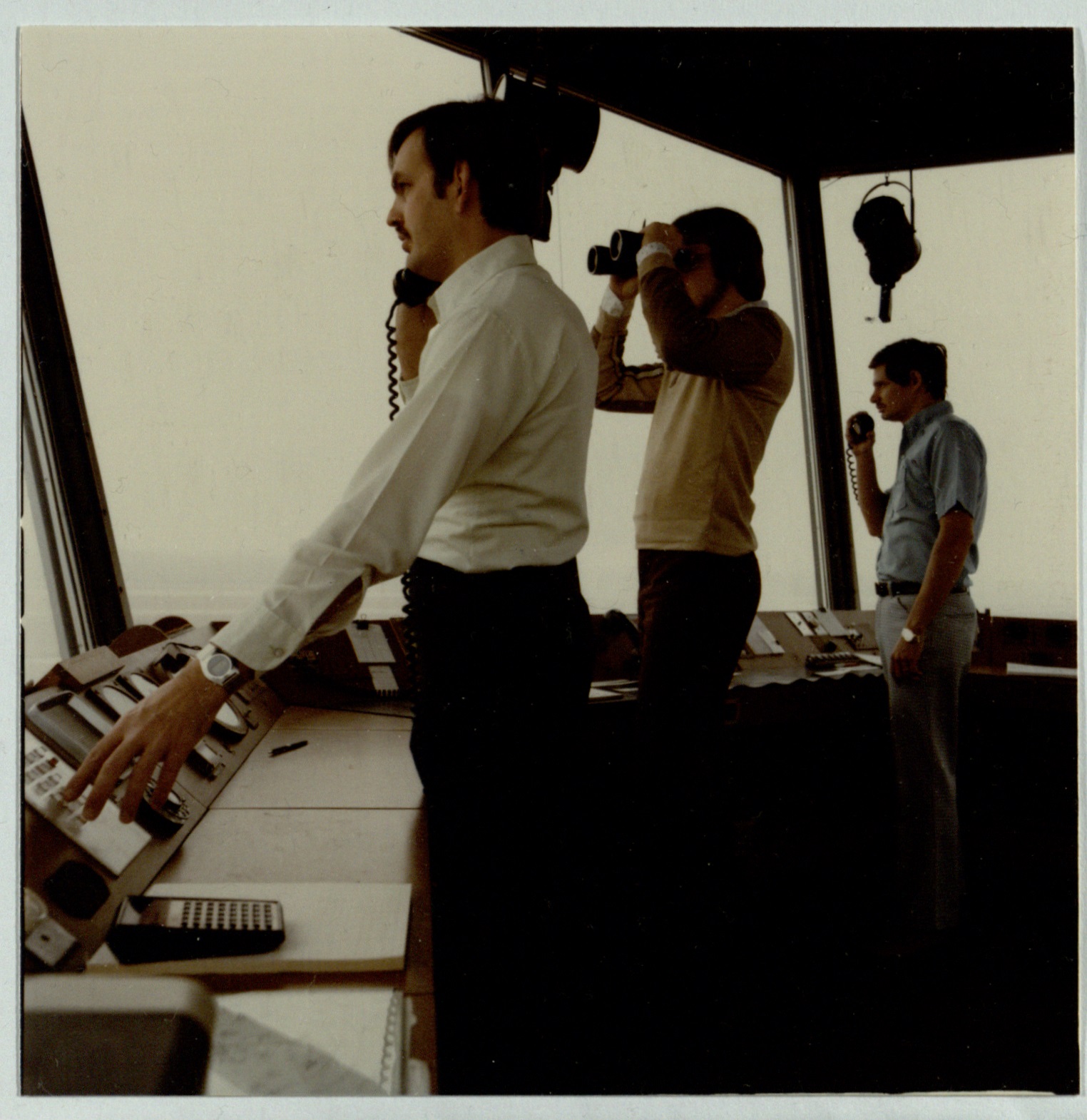 On January 11, 1968, air traffic controllers from all over the country gathered in New York to establish a means of advocacy for the profession. The air traffic controllers had previously never met on a national level, often only engaging with controllers in their own facilities. Through the national organizational efforts of the controllers, and the outreach of New York controller Mike Rock to famous trial lawyer F. Lee Bailey, the meeting was a success, with over 700 controllers in attendance. Bailey, a pilot and charismatic speaker who had only been exposed to the daily experience of air traffic control for a week by Rock, gave an inspiring address asking the ATCs to claim their “professionalism,” and to insist they be treated as professionals. Bailey’s enthusiasm resonated with the air traffic controllers who felt he had captured the plight and concerns of the ATCs. After choosing a name, the Professional Air Traffic Controllers Organization was established, with membership increasing rapidly as copies of Bailey’s speech spread and PATCO founders traipsed the country gathering supporters.6

The first action taken by PATCO was “Operation Air Safety” on July 8, 1968 in which air traffic controllers strictly adhered to the minimum separation standards for aircraft as regulated by the FAA. In practice this standard was routinely ignored to handle increased flight traffic and to avoid air delays. The purpose of this job action was to illustrate the commonplace safety violations that happened every day in air traffic control, violations that were in fact encouraged, and demanded, by FAA administrators to keep as many planes flying and landing as possible. PATCO also hoped to demonstrate to Congress that the FAA needed additional funding for air traffic controller training and better equipment. After weeks of flight delays and failed negotiation, a compromise between FAA chiefs and PATCO leaders was reached, with FAA granting PATCO membership dues. Congress increased the FAA budget, lifted the hiring freeze on air traffic controllers and exempted them from overtime pay restrictions.7

In a matter of months PATCO had become an influential battleship of a union, organized from a previously disenfranchised and geographically dispersed work force. When the gains made by the Operation Air Safety were not realized (FAA still did not hire more controllers, controllers did not get overtime pay promised by President Johnson, enforced OT was still prevalent, etc.) PATCO staged sick outs, rather than strikes, to bypass the federal law that mandated strikes by public employees illegal. Although the sick outs of 1969 and 1970 were ultimately unsuccessful, and escalated the acerbic relationship between controllers and the FAA, PATCO was able to forge new connections in the labor world and continue to develop air traffic controller solidarity.8 The air traffic controllers spent the next decade building their union membership up to over 80% of all air traffic controllers working in the US.

Having become nationally known for their strength and political edge, PATCO endorsed Ronald Reagan for president in the 1980 election, hoping for better contract negotiations. The FAA under Reagan gave more concessions to PATCO than any other administration, although still much less than PATCO hoped. These events led to mutually unrealistic expectations from both parties. After a failure to reach a negotiation, controllers began a strike against the federal government on August 3, 1981. This strike was deemed illegal as all federal employees are required to sign oaths agreeing not to engage in strikes as a job action. Reagan pledged an absolute refusal to be bullied by a union, using the strike as a means to illustrate his resolve and authority as a new president in the midst of the Cold War. He refused 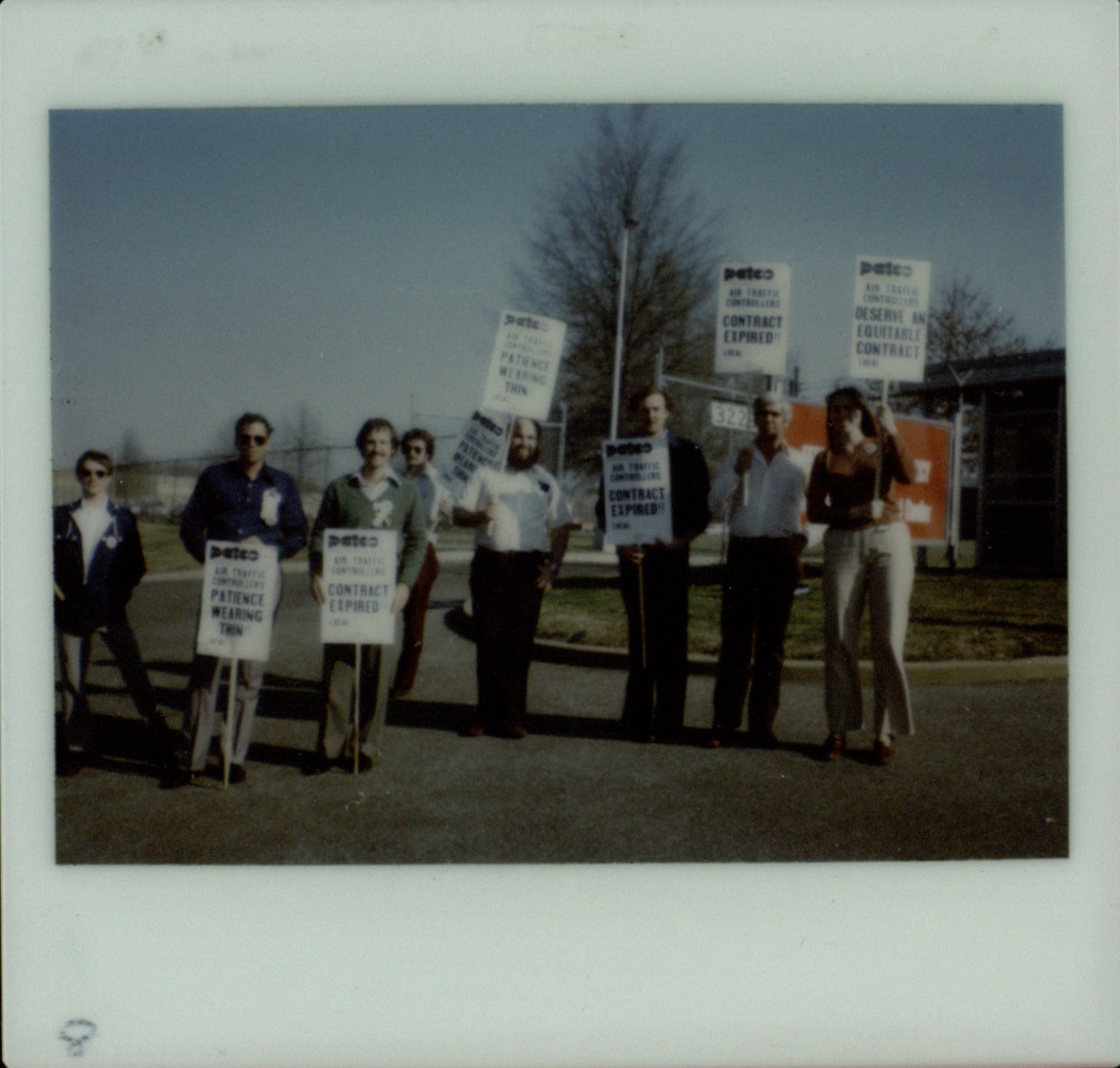 to engage with the strikers and fired over 12,000 air traffic controllers, immediately filling their positions with military personnel. Air traffic slowed, reports of near misses arose across the country, and Canada refused to hand off flights to the US for a week due to dangerous conditions.9

The PATCO strikers were blacklisted from working as air traffic controllers until President Clinton lifted the federal ban on rehiring them in 1993.10 Reagan and his administration employed intimidation tactics that further affected the livelihood of the strikers, such as denying unemployment appeals and federal housing assistance. In years following the strike, the FAA was found to have altered documents such as shift logs, vacation requests and other forms in order to fire more PATCO members who perhaps were not involved with the strike at all, but just out of town.11 While many factors contributed to the slump in labor participation over the next three decades, what the failed 1981 PATCO strike reinforced was the growing reluctance of labor unions to use strikes as a negotiating tactic at all.12

Rock, Mike. “PATCO History,” YouTube Video, 36:08, from a lecture on January 10, 1979 in Silver Spring, Maryland to a group of PATCO activists to prepare for 1981 contract negotiation with the federal government, posted by “JAMcCartin” on July 29, 2012: http://www.youtube.com/watch?v=l6P4d7NJNTk

One to two days for each lesson, but up to one week for Lesson 1.

Internet use is recommended but most materials will be included as PDFs to accommodate classrooms without internet access.

An iPad, laptop, or mp3 player to store pdfs of correspondence and play radio interviews could be used should you want.

The tour of the online website and finding aids will require internet access (Lessons 3 and 4). It should also be noted that while the interface for the digital collections website and the finding aid will change, the content within will still be available. Therefore Lessons 3 and 4 will have an expiration date.  Any questions or concerns please contact archives@gsu.edu or call 404-413-2880.

Why do workers strike?  Why did PATCO strike? 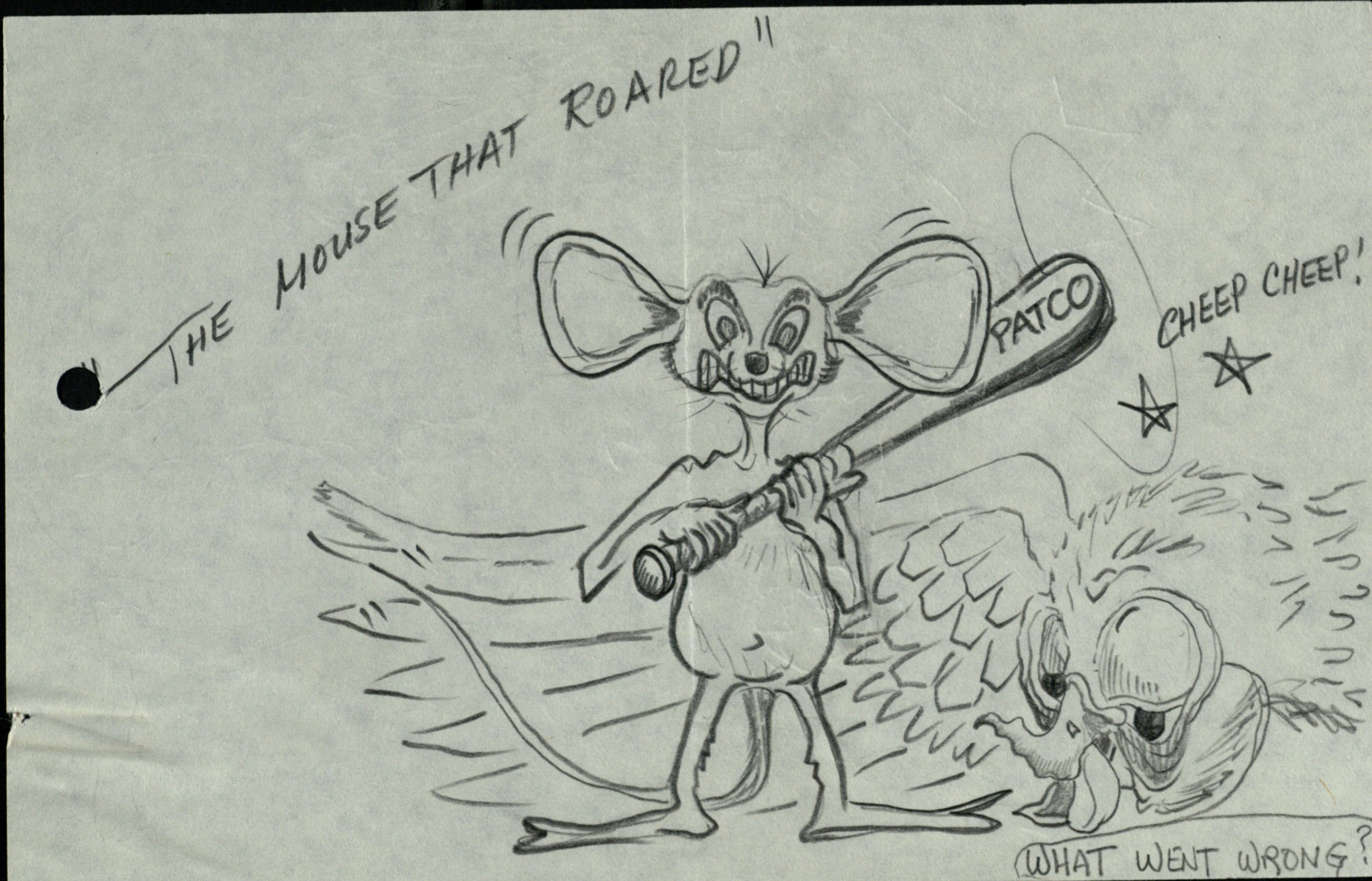 Strikes stem from poor working conditions that are not always easily understood by those outside the field or profession. Negotiation between workers and employers often worsen to the point of failed bargaining.  Empathy for the quality of life of other people is difficult to communicate.

One prevailing criticism of strikes is that workers should be content to have any job at all, and that labor unions are greedy and corrupt.   Swollen and wasteful bureaucracy may indeed be a characteristic of any organization, including labor unions. The argument could also be made that without labor unions, an employer is released from the responsibility of negotiation with their employees and from maintaining any kind of standard for humane working conditions. Our understanding of what “humane” working conditions entail has continued to evolve over time. Labor unions are a vehicle to preserve a dialog between employer and employee, and to advocate for the working woman and man. 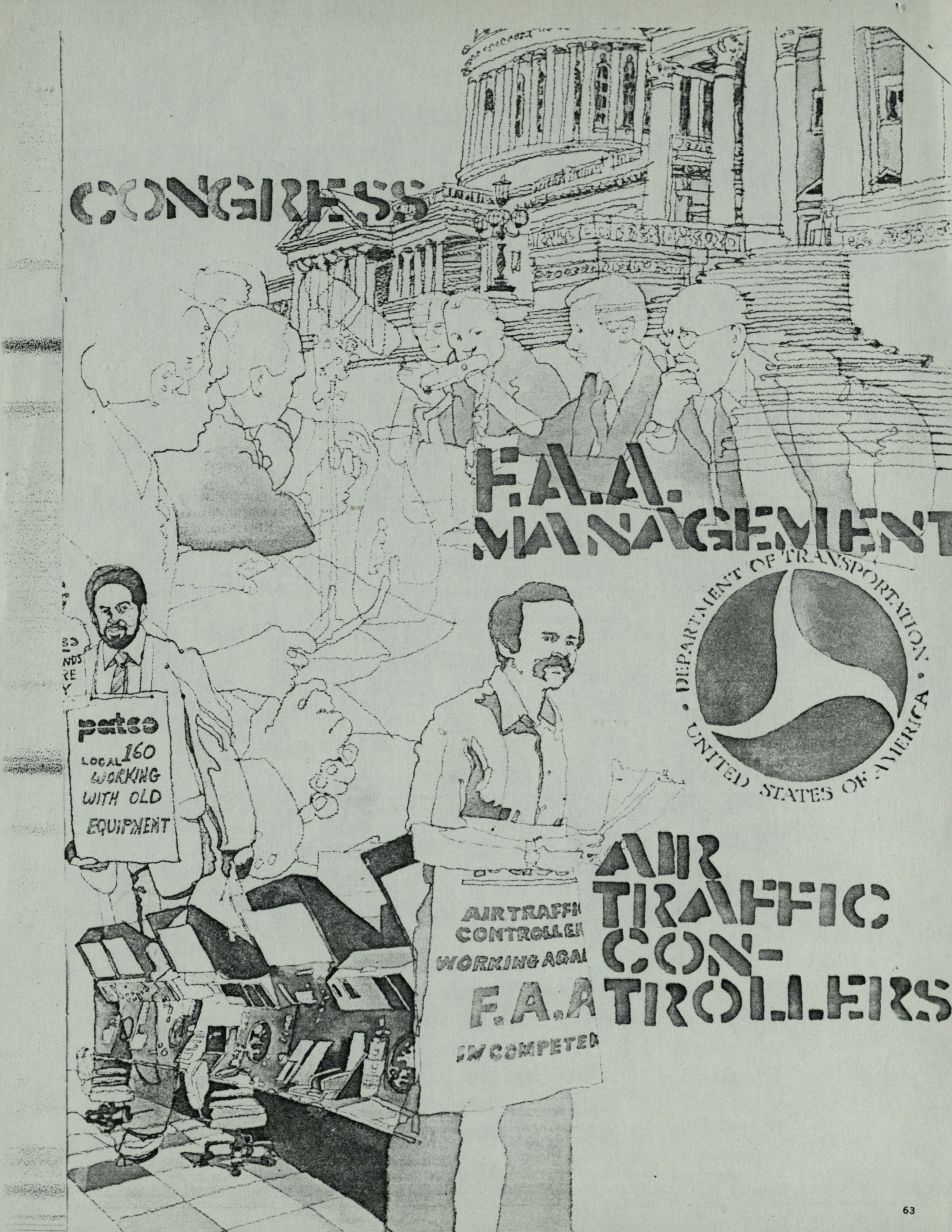 slump known as stagflation, where jobs stagnated but prices for goods continued to increase. This turned many members of the public against the strike, as air traffic controllers are public employees, paid through the federal taxation system, who take an oath upon employment not to strike. The public, being financially stressed, was not in a position to extend sympathy to the strikers.

You will also understand that PATCO’s bargaining had been shut down by the FAA and they had to either accept what was offered in a labor contract or walk away. PATCO had expectations of Reagan after endorsing him for president, and Reagan had expectations of PATCO after earlier concessions were granted to the union that had surpassed all other administrations. The PATCO strikers were blacklisted from working as air traffic controllers until Clinton lifted the federal ban on rehiring them in 1993, but Reagan and his administration employed further tactics to crush the lives of the strikers such as implementing intimidation tactics in unemployment appeals and denying them federal housing assistance. In years following the strike, the FAA was found to have altered documents such as shift logs, vacation requests and other forms in order to fire more PATCO members who perhaps were not involved with the strike at all, but just out of town.  While many factors contributed to the slump in labor participation over the next three decades, what the failed PATCO strike reinforced was the growing reluctance of labor unions to use strikes as a negotiating tactic at all.

Use statistics (ie: union members today as opposed to thirty years ago).

Digitization of the PATCO records funded by: