Myron Howard "Mike" Ross was born November 9, 1919 in New York City. He dropped out of school when he was seventeen and moved to Texas, where he worked on a farm. From 1936 until 1939, Ross worked in a bakery in North Carolina. In the summer of 1938, he attended the Southern School for Workers in Asheville, North Carolina. During the fall of 1938, Ross would attend the first Southern Conference on Human Welfare in Birmingham, Alabama. He would attend this conference again in 1940 in Chattanooga, Tennessee.

From 1939 to 1940, Ross worked for the United Mine Workers Non-Partisan League in North Carolina, working under John L. Lewis. He was hired as a union organizer by the United Mine Workers of America, and sent to Saltville, Virginia and Rockwood, Tennessee. In 1940, Ross ran for a seat on city council on the People's Platform in Charlotte, North Carolina. During this time, he also married Anne "Buddie" West of Kennesaw, Georgia.

From 1941 until 1945, Ross served as an infantryman for the United States Army. He sustained injuries near the Battle of the Bulge in the winter of 1944.

From 1945 until 1949, Ross worked for the International Union of Mine, Mill and Smelter Workers, then part of the Congress of Industrial Organizations (CIO), as a union organizer. He was sent to Macon, Georgia, Savannah, Georgia and to Winston-Salem, North Carolina, where he worked with the United Furniture Workers of America. He began handling arbitration for the unions.

Ross attended the University of North Carolina law school from 1949 to 1952. He graduated with honors but was denied the bar exam on the grounds of "character." From 1952 until 1955, he worked for the Mine, Mill and Smelter Workers as a union organizer, first in New Mexico (potash mines) and then in Arizona (copper mines).

From 1955 to 1957, Ross attended the Columbia University School of Public Health. He worked for the United Mine Workers of America Welfare and Retirement Fund from 1957 to 1958, where he represented the union in expenditure of health care for mining workers. By 1958, Ross began plans for what would become the Fairmont Clinic, a prepaid group practice in Fairmont, West Virginia, which had the mission of providing high quality medical care for miners and their families. From 1958 until 1978, Ross served as administrator of the Fairmont Clinic.

Working for the Rural Practice Program of the University of North Carolina from 1980 until 1987, Ross taught in the medical school. M. H. Ross died on January 31, 1987 in Chapel Hill, North Carolina. 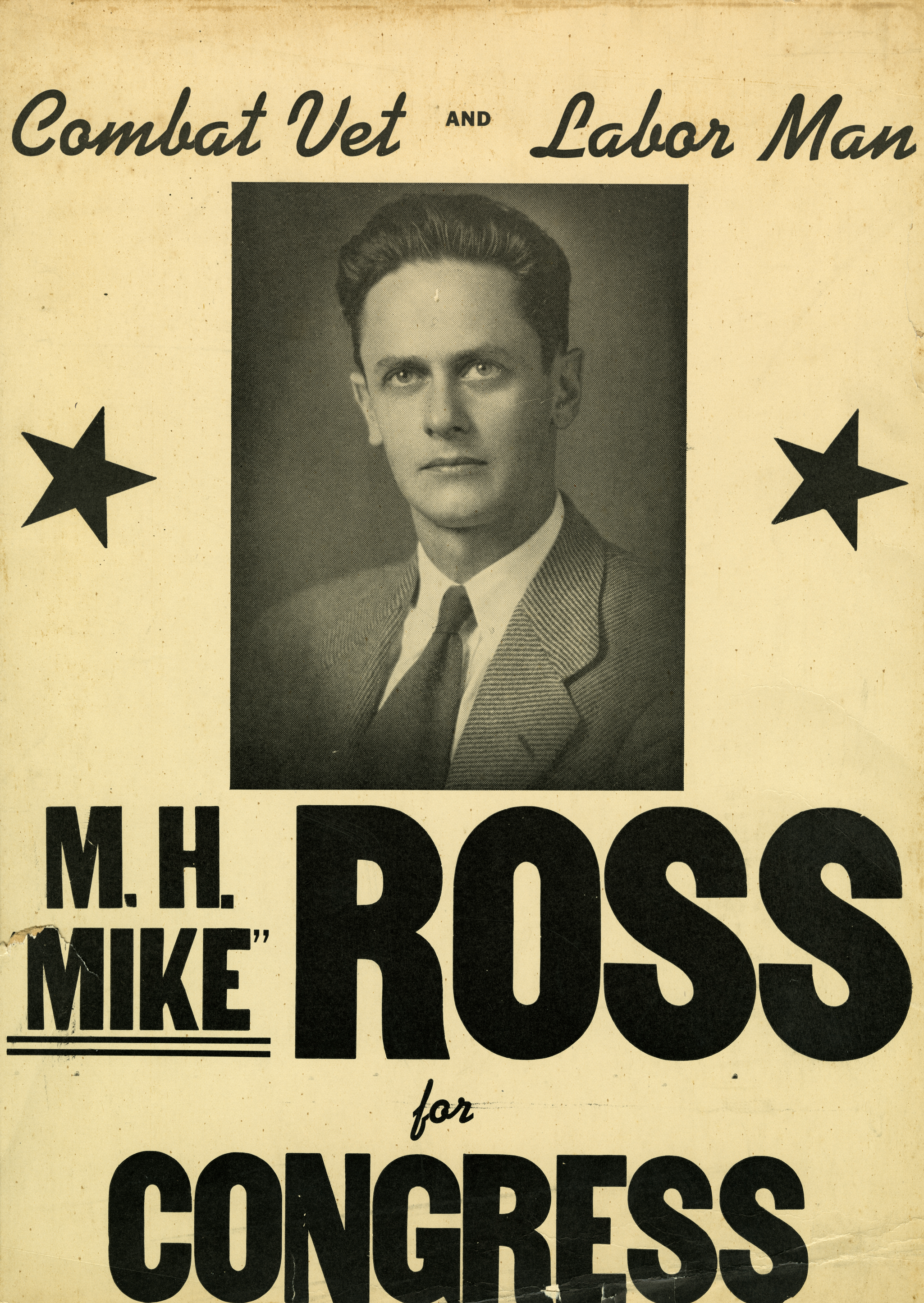 Due to their party platform, the Progressives became the target of a successful red-baiting campaign that was launched by politicians and the media. Although the Progressives did not earn enough votes during the election to win, it is noteworthy that they were able to gather the 30,000 signatures of registered voters required to get their candidates on the ballot in a conversative, Southern state.

It was during this time that Ross' political ideology and passion began to form, particularly a concern for impoverished and uneducated communities.  He was an adamant collector of newspaper articles, academic and government research journal articles, propaganda and campaign materials from both political sympathizers and antagonists, and many other resources.  Ross was prone to making prodigious notes on the words and ideas that stood out to him on these items, often underlining important passages and making notes in the margins about his thoughts while reading.

Items of particular interest include an oversize Henry Wallace poster advocating the end of Jim Crow laws, a small collection of Henry Wallace election materials and propaganda, and two transcription disks of some of Ross' campaign speeches.

Ross worked with the International Union of Mine, Mill, and Smelter Workers and then as an International Representative for the United Furniture Workers of America during the CIO's "Operation Dixie." 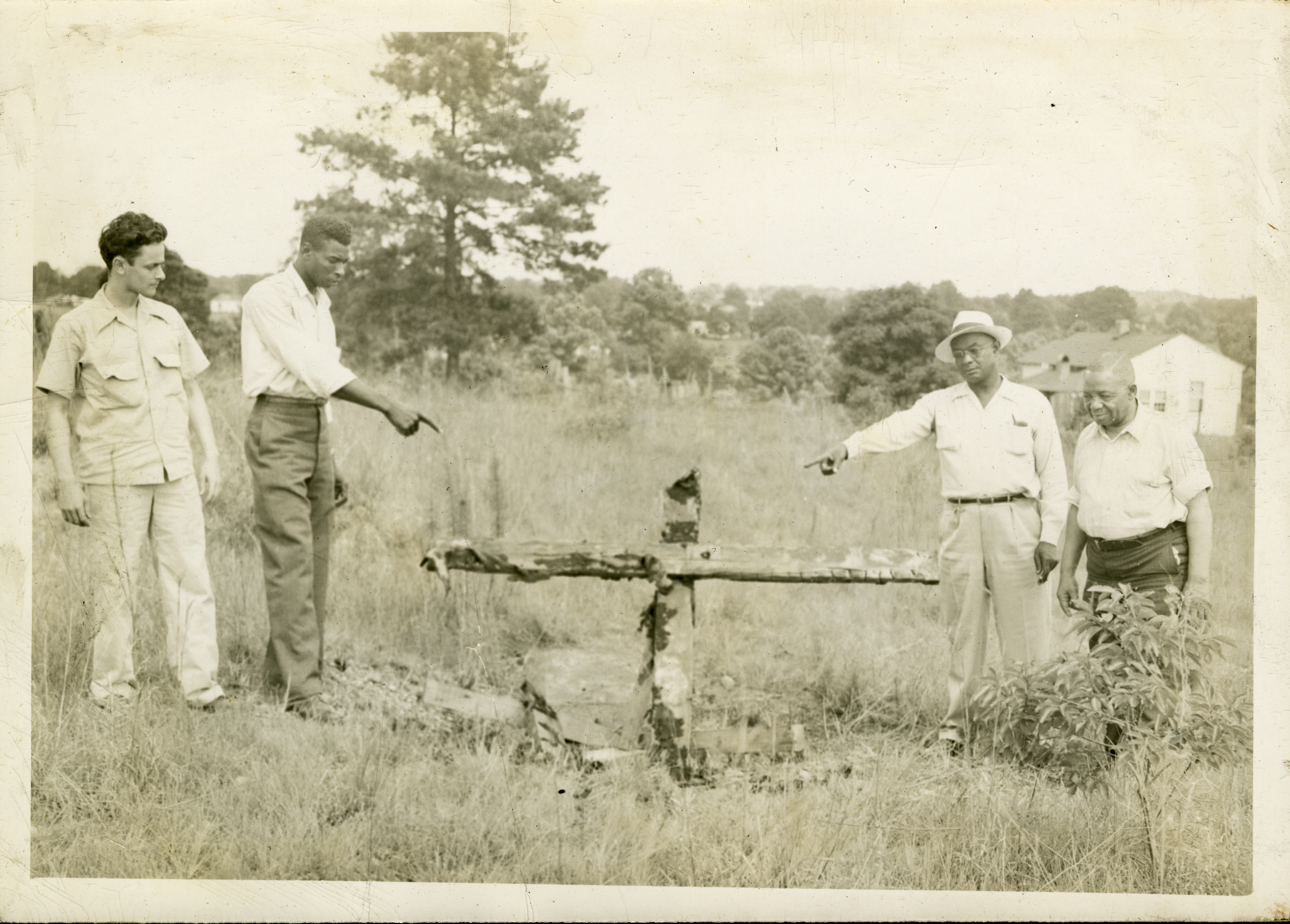 The South was not labor-friendly during this time, especially to organizations or people who wanted to do abolish Jim Crow laws.  Ross not only researched the increasing climate of racial tension with the enforcement of civil rights laws, but also personally experienced the prejudice of locals for his progressive views.

There are a vast number of articles and newspaper clippings related to racism, segregation, integration, civil rights, Jim Crow laws, the Ku Klux Klan (which was experiencing a resurgence in the South at the time), lynching, and many of the both obvious and subtle types of racism prevalent in the South during the 1940s to 1960s.  There are also two photo albums, with some notes on the photos contained therein, of Ross during this time period; they document the politics and social injustice of the area in a profound way.  Ross' family, union colleagues and associates, union, legal, and arbitrative activities are all included. 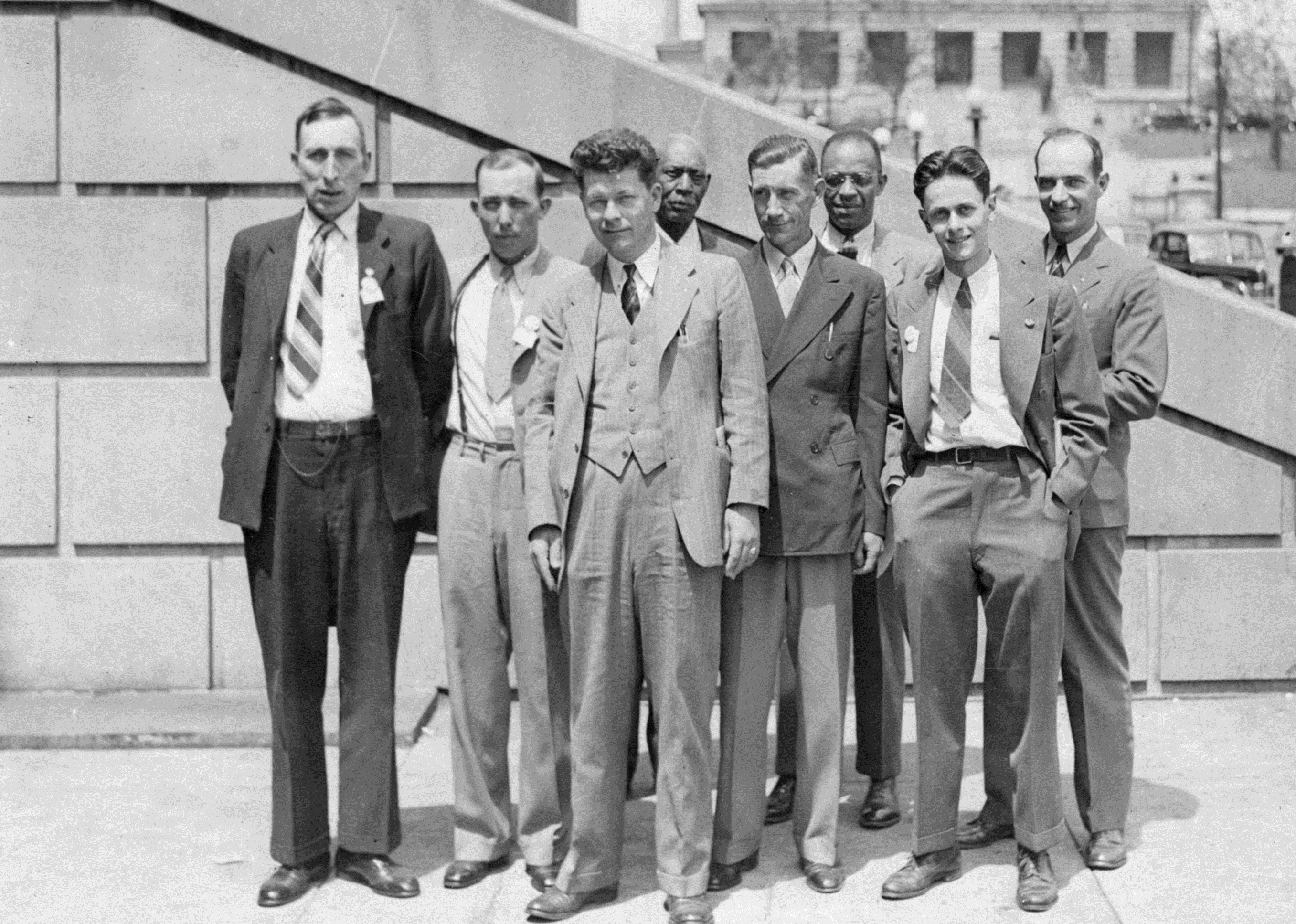 Mike H. Ross, after being injured during World War II, came back to the United States, where he was stationed in several army bases to convalesce. These included Fort Dix, New Jersey and Fort Oglethorpe, Georgia. Ross also spent some time in New Orleans, Louisiana after the war, and was in North Carolina during the late 1940s and early 1950s. During this time, Ross began doing research for a history on the populist movement in the South. Among the materials Ross began to save for research include articles related to communism, the anti-Communist movement in the United States (the Red Scare), the labeling of many Americans as communist (better known as red-baiting), and the House Un-American Activities Committee, as well as McCarthyism in general.

Because of his outspoken progressive views and his involvement in progressive politics, organizing, and the spread of unionism, Ross was often accused of being a Communist by his political and social adversaries.  From his entrance into the political fray during his 1948 Congressional campaign to his graduation from law school, these accusations persisted.  Of particular interest are Ross' files on the denial by the North Carolina State Bar to take the bar exam, despite having graduated with honors from the University of North Carolina School of Law.  These files include applications, letters of recommendation, statements of moral character, and newspaper clippings of the extensive coverage of Ross' 3-year battle with the State Bar to fight this decision.

For nearly his entire organizing career, Ross was involved with miners and mining, either through the International Union of Mine, Mill, and Smelter Workers or the United Mine Workers of America, the Fairmont Clinic, or the Rural Practice Program.  Because of his involvement in their daily lives, he became passionately dedicated to documenting and improving the lives of miners, their families, and their communities.

Ross researched the lifestyle of Appalachian coal miners, the advent of women in the coal mining industry, coal mining methods, and coal mining diseases, collecting newspaper and journal articles, organizing material, local, state, and federal government reports and studies, books, posters, labor prints from the late 1800s, and a comprehensive compilation of photographs and slides of nearly every facet of coal mining and coal mining communities.

Ross also began administering interviews in oral history format with people in many areas of the mining community, including miners, mine owners, medical professionals involved in mining, rural, and impoverished communities, researchers on black lung and mine dust, engineers and architects involved in mine construction, members of mining unions, historians specializing in mines and mine workers, survivors and widows of mine disasters, and many many others. Of particular interest are personal stories of being attacked and harassed by the KKK in the South (corresponding to photos within the collection), of generations of mine workers within the same family, of traditional mine labor songs and singers, of mine-related illnesses, of the perspectives of miners on the world, on their communities, on their profession, and of themselves. During the course of his research, Ross amassed a collection of more than 150 of these oral histories.

From his exhaustive research and personal experiences, he began a manuscript that never made it to publication.  Drafts, notes, corresondence, and references materials correlating to this manuscript are collected into a single series. 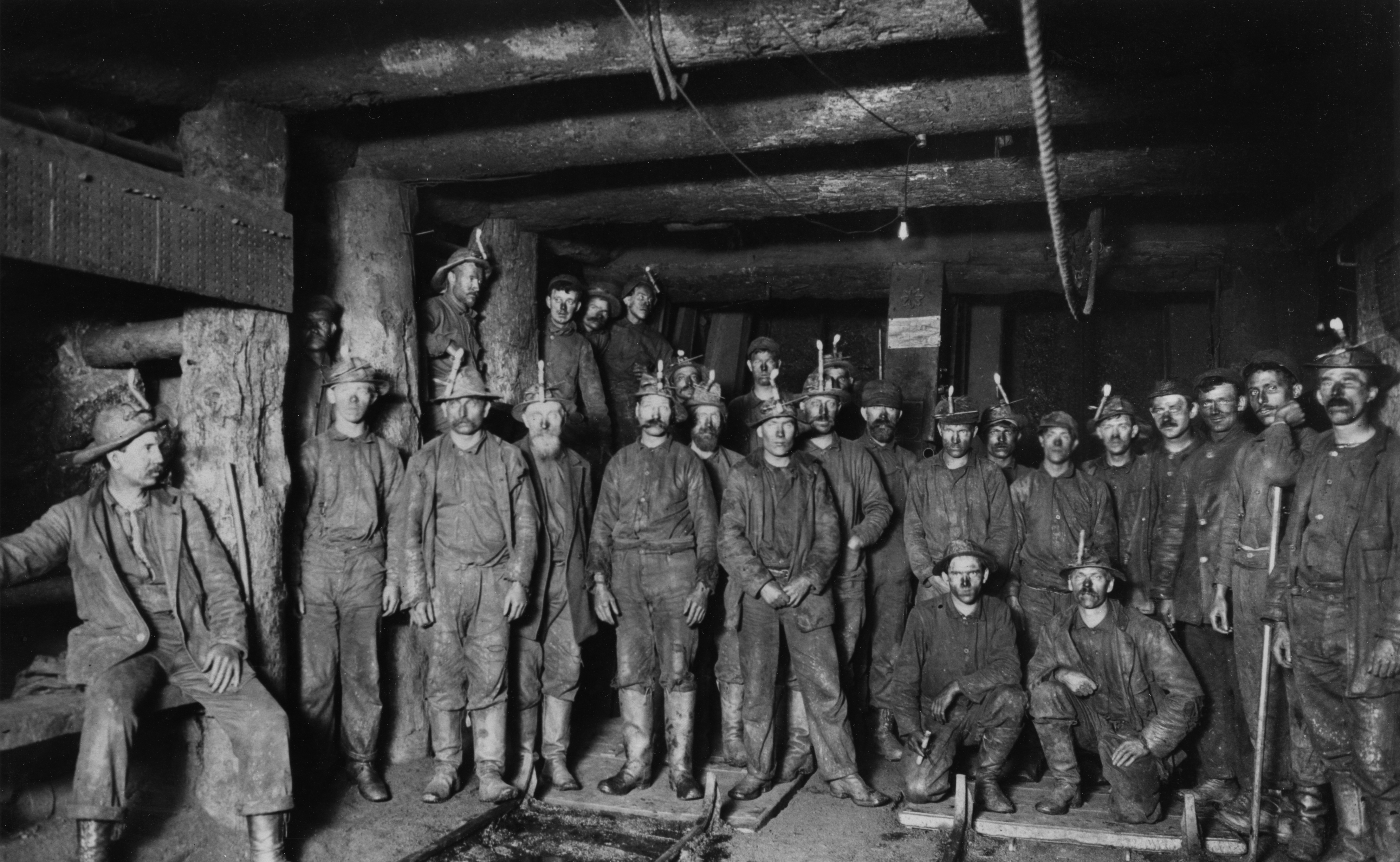 During the 1940's, Mike H. Ross worked with the International Union of Mine, Mill, and Smelter Workers and then as an International Representative for the United Furniture Workers of America - Congress of Industrial Organizations (CIO) and part of the CIO's "Operation Dixie". Operation Dixie was a movement during the 1940's by the CIO to organize southern labor into unions, at a time when the South was not labor-friendly. There are many news clippings from various southern or labor newspapers during this time, some of which were written by Ross. 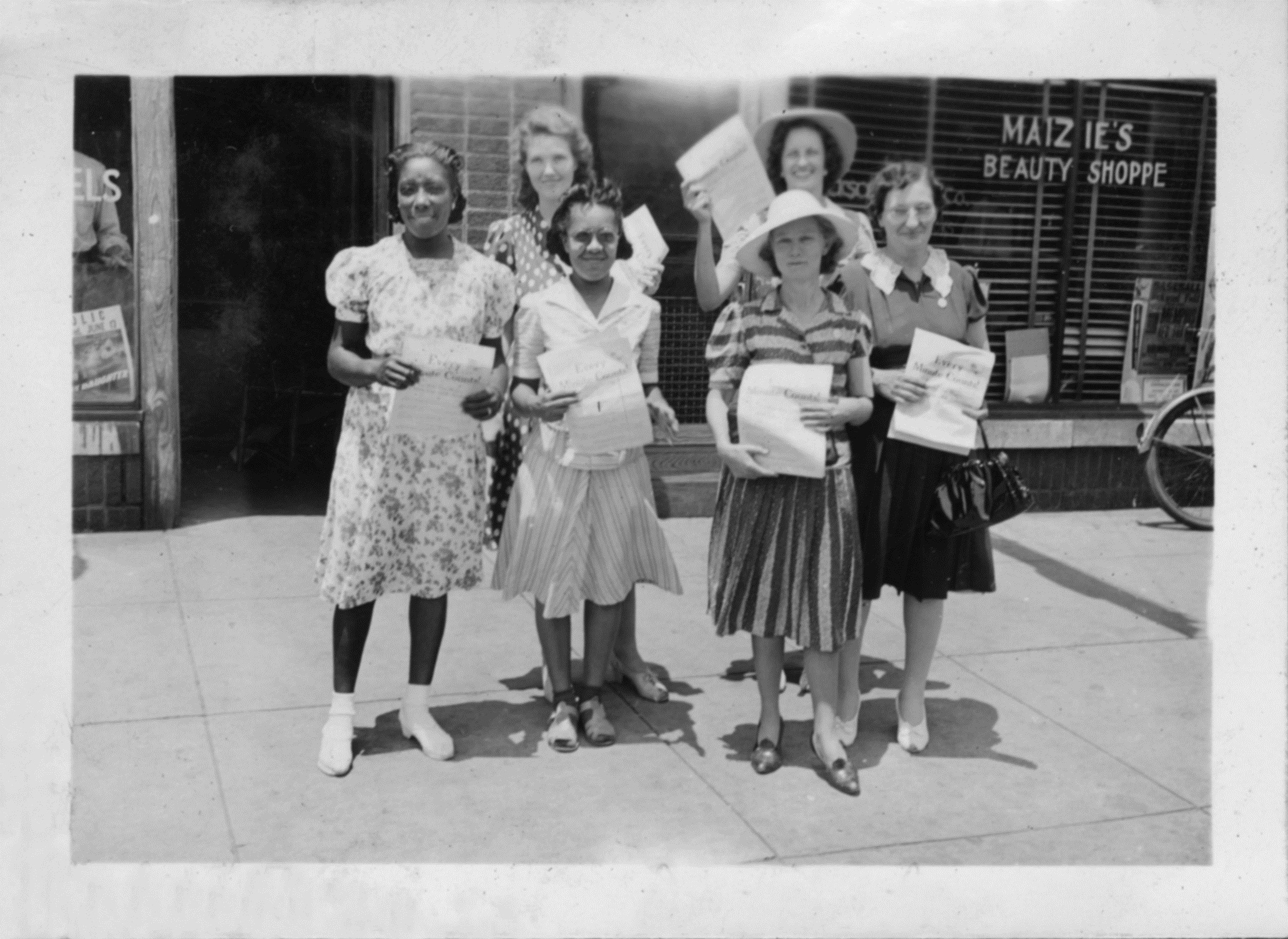 At one point during his career, Mr. Ross was interviewed about the hositlity of the southern towns to organized labor and to him, personally, as an organizer.  He bravely proclaimed, "In this city, unions are here to stay."  This passion and vehement support of labor rights was not always well-appreciated by the towns which he visited. In one such Southern town, while Mr. Ross happened to be out, a masked man broke into and ransacked his home, holding his wife and daughter at knifepoint, explaining that he would murder Mr. Ross if he didn't cease organizing and immediately leave town. Articles, police reports, witness testimonies, and Ross' personal notes and thoughts related to this event are included in the collection.

It should be duly noted that his wife, Annie West Ross, was truly his partner in every sense of the word.  She was inextricably involved in the many aspects of his organizing career.  She was extraordinarily active in women's auxiliaries, strike lines and kitchens, and briefly as an organizer for the United Electrical, Radio, and Machine Workers.  Some of the earliest photographs in the collection are images of Mrs. Ross with other white and black women handing out unionization flyers in Alabama in the 1940s, an activity which earned the scorn of many residents of the town. 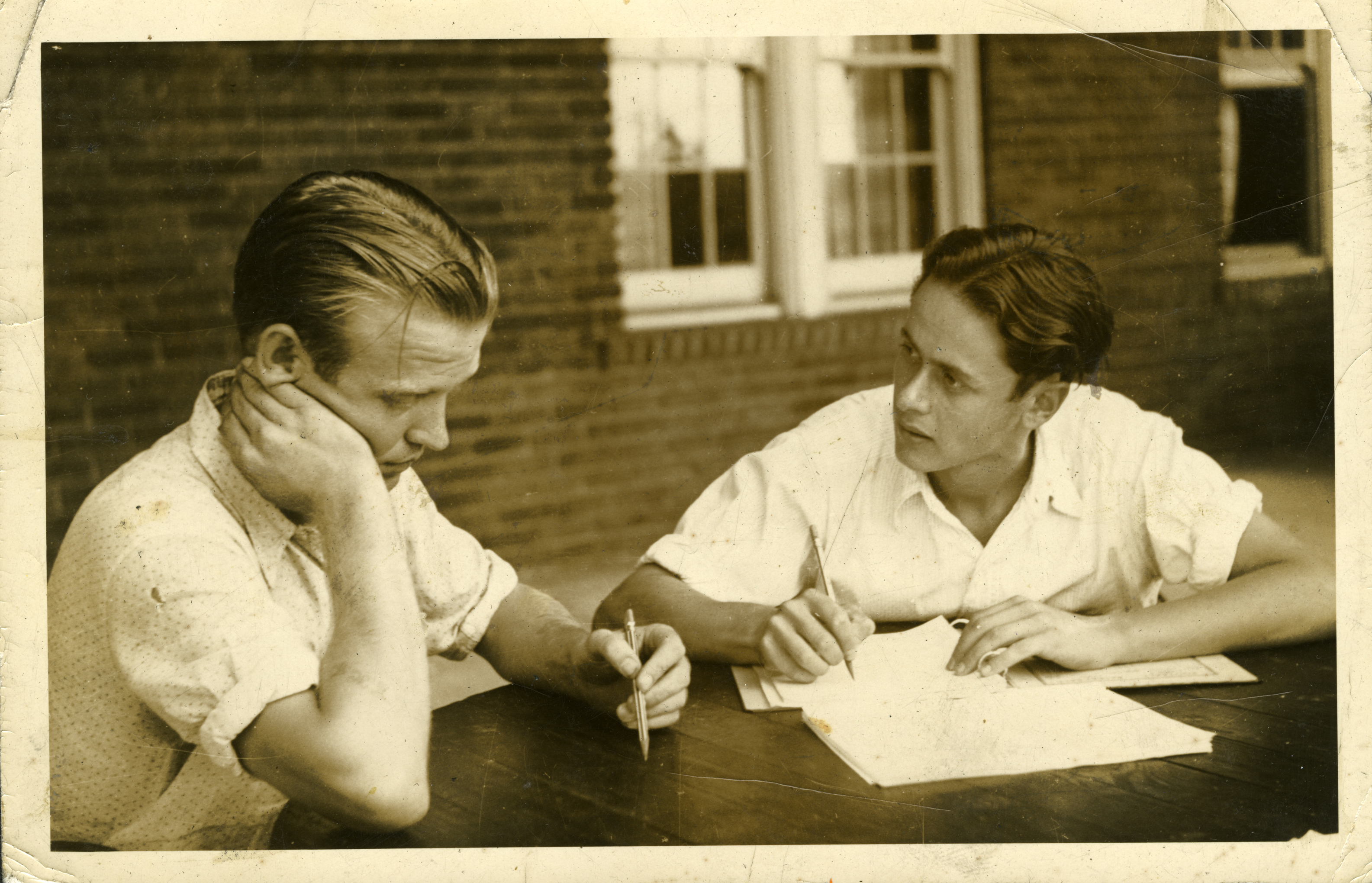 During the course of his research into Appalachian life and culture, Ross conducted or directed thirty-five family oral histories by and with Lillie Mulkey West and her family between 1969 and 1978. Lillie Mulkey West, the mother-in-law of M. H. Ross, was a fourth generation North Georgian and an early ballad singer and worker-musician.

Near the end of his life, Jane Ross Davis, Ross's daughter, conducted several interviews with her father. The interviews cover many aspects of his professional and personal life, including his early career and involvement in the labor movement, his involvement with the Progressive Party and progressive politics, his thoughts, feeling, and experiences pertaining to racism and prejudice, his passion for the mining community and as a healthcare advocate for miners, and so many other topics.  Truly, these oral histories are an invaulable addition to the collection, integrating the thoughts and often feelings of the creator of the collection with its contents, adding an intimate and personal aspect that is extraordinary. 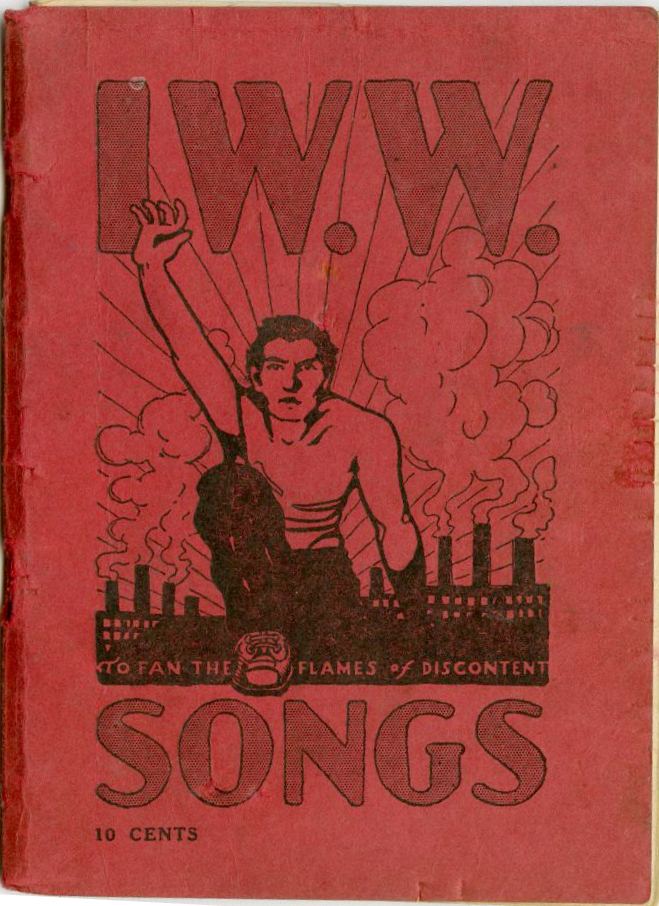 oss always had both a personal and 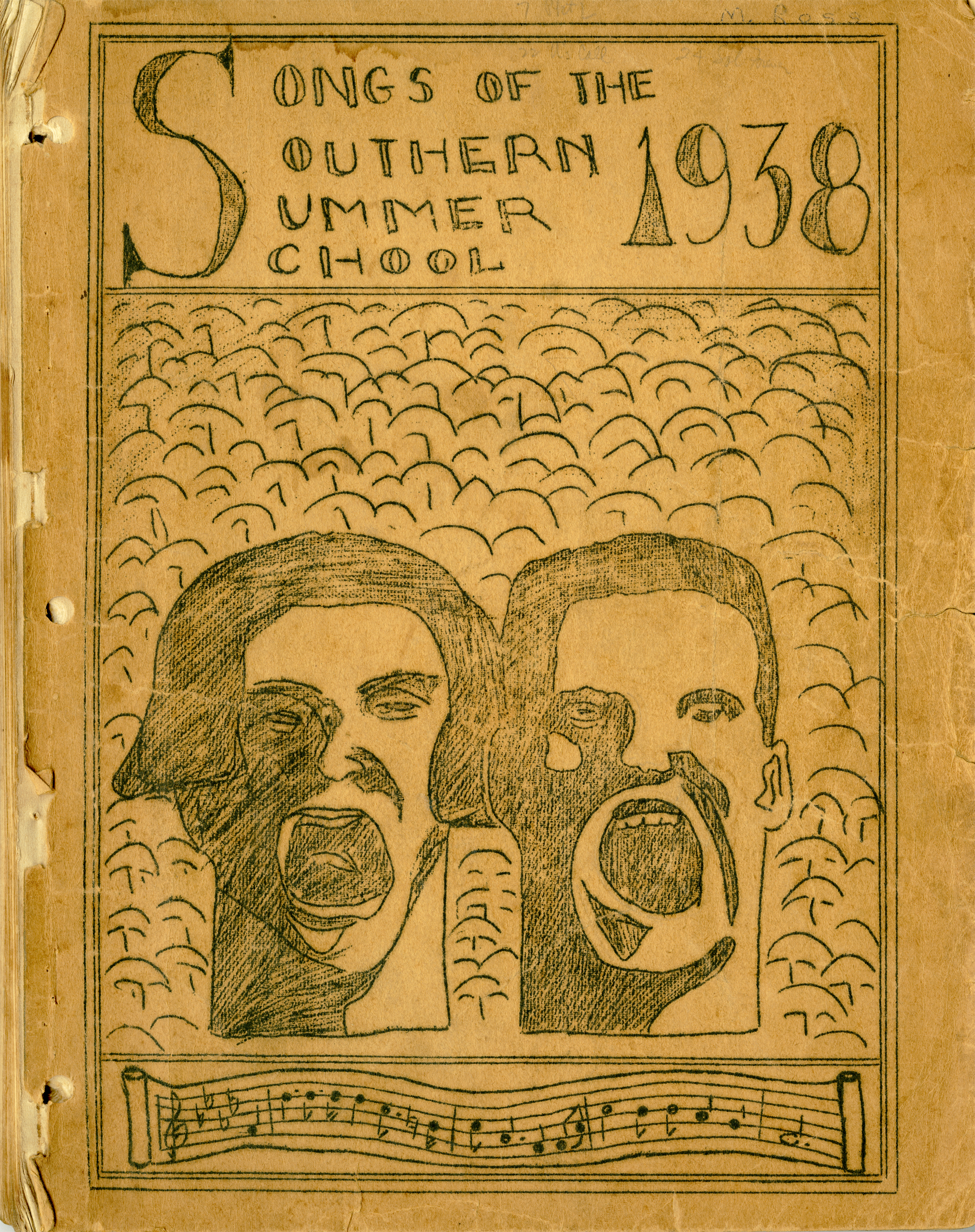 professional interest in music and culture and their influence on the labor movement.  Over his years as an organizer and researcher of coal mining in the South, he became particularly enthralled with Appalalchian culture and music because of its close ties with mining communities. He collected photographs, postcards, articles, studies, books, and so many other materials on the many aspects of Appalachain culture, including (but in no way limited to): linguistics, art and music, family and community structure, economics, politics, and education.

In addition, he amassed a collection of labor and folk songbooks and music from a variety of sources, including the Southern Summer School for Workers, the United Mine Workers of America, the United States military, the Congress of Industrial Organizations, the Highlander Folk School, the Textile Workers Union of America, the International Workers of the World, and the Farmers Educational and Cooperative Union of America, as well as many individually produced and distributed sheet music pages, chants, and strike songs.