This guide will help you find information and resources on US and GA Elections. Click on the various links to access library resources plus reliable, relevant websites. 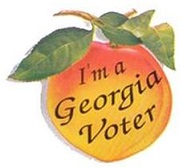 The links below will provide you with election information for individual states. Most sites allow you to access election data, statistics, and results. Some include precinct maps and other voter info. Election results provided on each site will vary depending on the state For additional information, use your favorite browser and search for individual county election websites. Example: Hunterdon County, NJ: Election & Voter Information.

iPOLL is a library database for public opinion research. Content is organized at the question level. (Campus ID/password required for remote access.)