I. History and background information

II. Versions of the Sanborn maps

III. Other libraries in Georgia with paper copies

I. History and Background Information on Sanborn Maps

"The Sanborn map collection consists of large-scale maps in full color, dating from 1867 to the present, and it depicts the commercial, industrial, and residential sections of ... cities and towns in the United States, ... The maps were designed to assist fire insurance agents in determining the degree of hazard associated with a particular property and therefore show the size, shape, and construction of dwellings, commercial buildings, and factories as well as fire walls, locations of windows and doors, sprinkler systems, and types of roofs. The maps also indicate widths and names of streets, property boundaries, building use, and house and block numbers. They show the locations of water mains, giving their dimensions, and of fire alarm boxes and hydrants. Sanborn maps are thus an unrivaled source of information about the structure and use of buildings in American cities." Fire Insurance Maps in the Library of Congress. - Pref.

Note: The mapping is no longer being conducted. After WWII production of new maps and revisions by Sanborn decreased drastically and ceased in 1961. After 1961 no new maps were produced and only the revision service continued. There were a few revisions up to 1990. 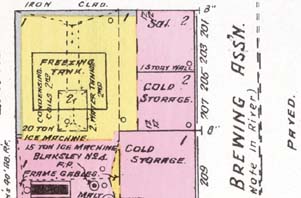 II. Versions of the Sanborn Maps

Sanborn® Fire Insurance Maps For Georgia Towns and Cities, 1884-1922 consists of 4,445 maps by the Sanborn Map Company depicting commercial, industrial, and residential areas for 133 municipalities up to 1922. Originally designed for fire insurance assessment, the color-coded maps relate the location and use of buildings, as well as the materials employed in their construction.

This Sanborn Maps® database is a project of the Digital Library of Georgia as part of Georgia HomePLACE through the Georgia Public Library Service, a unit of the Board of Regents of the University System of Georgia. The maps represented are from the University of Georgia Libraries Map Collection. These maps are free to the public, since they are outside the protected copyright dates.

Database available to the GSU community.

Black and white digitized images for places in Georgia, usually dated from the 1880's through the early 60's. The sheets contain both original sheets and revised editions (denoted by the * [asterisk] in the dropdown date selection pages)

The maps have been copied in color from the paper map sheets to illustrate building materials, and related features.

III. Other Libraries in Georgia with Paper Copies

Fire insurance maps in the Library of Congress : plans of North American cities and towns produced by the Sanborn Map Company : a checklist / compiled by the Reference and Bibliography Section, Geography and Map Division.: Washington, D.C. : Library of Congress, 1981.

* Arranged by place name and date with number of sheets included which have been microfilmed for our collection.

Indexes in the Printed and Microfiche volumes

At the beginning of each edition of maps there is a street index for locating the map sheet number in the volume. Some building names are also indexed.